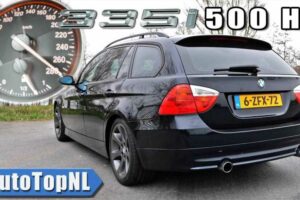 The station wagons have lost their popularity in the United States but they remain a vital part of personal transportation in Europe, especially in Germany. That’s why basically all German automakers still have long roof versions of their core models. The premium brands, like Audi, BMW, and Mercedes-Benz, offer some of the most beautiful and potent wagon models in the world and it’s been like this for years.

You don’t have to buy a brand new performance wagon if you want to go fast on the German Autobahn as some previous generation models are also quite capable. Take for example the BMW 3 Series from model family E90, which had a good-looking and powerful wagon version in the form of the 3 Series E91. It was sold with a number of different gasoline and diesel turbo engines with the range-topping variants offering respectable performance.

A new video takes us to the Autobahn for a ride onboard a 3 Series E91 with a 3.0-liter twin-turbo straight-six engine under the hood. In factory form, it produces 302 horsepower (225 kilowatts) and 300 pound-feet (400 Newton-meters) of torque. However, this is not a stock example and this one has about 500 hp (368 kW) coming from the same inline-six turbocharged engine.

The video above contains several 62-124 miles per hour (100-200 kilometers per hour) accelerations and, frankly, we are amazed by this BMW wagon. It does the sprint in about eight seconds and has literally zero problems reaching 174 mph (280 kph). Considering this car left the factory as a luxury family hauler, we are impressed by its current performance with almost 155,000 miles on the odometer.

We forgot to mention this 3 Series wagon has a six-speed manual gearbox and that surely adds to the excitement behind the steering wheel. A good-looking car with 500 hp and enough cargo space to fit all your belongings that can deliver almost supercar levels of performance? Yes, please.