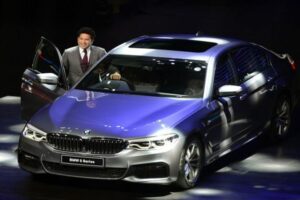 The 5 Series is BMW’s second best-selling model and achieved an average rating of 4.67 out of five. The survey, conducted by Zutobi, averaged ratings from the end of 2020, based on three major car review sites, Parkers, HonestJohn and AutoTrader.

The Range Rover came in second with an average rating of 4.63 thanks to its icon status in the UK, having been on our roads since 1970.

Both the Honda Jazz and the SEAT Leon were tied for third place, both averaging a respectable score of 4.5.

The Range Rover had the highest average from Parkers, at 4.9 out of five, the highest of any car across the three sites.

The Citroën C3 had the dishonour of having the lowest rating across all three sites, averaging just 3.6 out of five.

The hatchback is rather common on the roads, but it seems that it lacks compared to other competitors like the Honda Jazz or Toyota Yaris.

The Volkswagen Polo finished second from bottom with an average rating of 3.63, despite receiving a respectable rating from AutoTrader at 4.5.

Surprisingly, the Vauxhall Corsa ranked as the third worst rated car, scoring an average of just 3.67.

In the late 90’s, the Corsa was the best-selling car in the world and still continues to sell well in the UK, although many other similar cars are available for a cheaper price.

The German car maker was ranked as the most popular brand with an average rating of 4.48.

In second place is Hyundai with an average score of 4.4.

This is despite only having one vehicle in the top 50 most popular cars, the Hyundai i10.