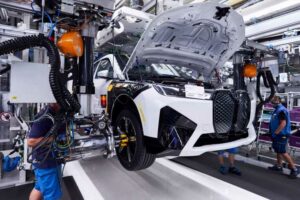 It is BMW’s first electric SUV that is purpose-designed to be electric, and the manufacturer has very high expectations of it.

BMW wants half of the vehicles that come out of its Dingolfing plant in Germany to be electrified by the end of the decade, and the first EVs have started rolling off the production line. The plant that was just making the 4 Series, 5 Series, 7 Series and 8 Series has just started producing the iX fully-electric SUV.

The BMW iX is not related to any existing model in BMW’s lineup, and it has the bold design to prove it. The manufacturer invested some 400-million Euros to prepare the facility for iX manufacturing, as well as to produce more electric vehicles in the future.

According to the head of BMW Group Plant Dingolfing, Christoph Schröder,

As the primary plant for the luxury class, our location produces the BMW Group’s technology flagship. It is once again proving itself as a pioneer for the mobility of tomorrow and as the industry leader in key future areas of automotive activity, such as electrification, digitalisation and sustainability. In this way, the BMW iX is continuing the successful transformation of the BMW Group location in Dingolfing that began long ago.

The next BMW EV to enter production in Dingolfing is the i4 around the end of the summer, with first deliveries set to commence in November. The plant will also build the upcoming fully-electric version of the BMW 7 Series, and pretty much all of the manufacturer’s larger electric offerings. The automaker will unveil three more EVs in 2022, and another five in 2023, although not all will be built in Dingolfing – BMW expects that by 2025, over half of all the vehicles it will sell will be electric.

Milan Nedeljković, member of the Board of Management of BMW AG, responsible for Production, explains that

The launch of the BMW iX* marks another milestone in our expansion of electrification and demonstrates our production network’s successful transformation towards electromobility and digitalisation. The BMW iX* will already be one of the highest-volume model at the location by next year.

END_OF_DOCUMENT_TOKEN_TO_BE_REPLACED

Building one’s entire understanding of cars around cheesy early-2000s action flicks can do some strange stuff to your brain. Like, […]