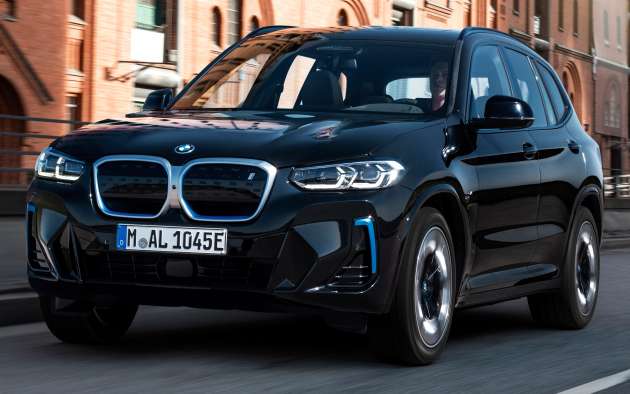 Days after spec sheets of the new BMW iX3 had been leaked online, BMW Group Malaysia has made it official by finally launching the electric SUV here. The second electric model being introduced this year, the car provides a more affordable alternative to the larger iX, using the X3 as its base.

As has already been made known, the car arrives in Inspiring and Impressive variants, priced at RM317,360 and RM336,360 respectively, on-the-road without insurance. These figures include the sales and service tax (SST), meaning that deliveries will only begin next year after the exemption ends on December 31 – although it may well get extended again.

Both variants are identical mechanically, powered by a rear-mounted electric motor delivering 210 kW (286 PS) and 400 Nm of torque. So equipped, the iX3 will get from zero to 100 km/h in 6.8 seconds before hitting an electronically-limited top speed of 180 km/h.

The car is also fitted with a 73.8 kWh lithium-ion battery that provides a range of between 453 and 461 km on the WLTP cycle. Charging the iX3 takes around seven and a half hours using the maximum AC charging power of 11 kW; alternatively, you can juice the battery through a DC fast charger at up to 150 kW, filling it up to 80% in just 32 minutes.

The iX3 arrives in Malaysia in facelifted form (before the regular X3 gets its nip and tuck) and thus gets slimmer trapezoidal headlights, a larger conjoined grille and pincer-style three-dimensional taillights. Having previously been offered without the M Sport package, the sportier look is now fitted as standard, adding a large hexagonal centre air intake, L-shaped corner inlets, body-coloured cladding and a large rear diffuser.

The changes are even more pronounced inside, with a new angular dashboard that borrows elements from the G20 3 Series, including the ergonomic clustered switchgear. The centre touchscreen is larger at 12.3 inches across, part of the now-standard BMW Live Cockpit Professional that also adds a 12.3-inch digital instrument cluster.

There’s no large curved display panel to be had here, unlike in the iX; the car retains the use of BMW Operating System 7 instead of the newer eighth-generation software. As part of the M Sport package, the iX3 also receives an M Sport steering wheel, sports seats and black headlining.