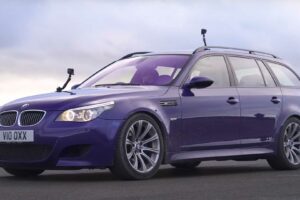 Judging by name alone it doesn’t seem fair to race a BMW M5 against an M440i, but things get a little different when you realize that these cars are separated by over 15 years of progress. In the early 2000s the E61 BMW M5 Wagon was one of the most impressive performance machines on earth thanks to its high revving V10 engine, but how does it stack up against a mid-level performance BMW right off the assembly line in Munich? To find out, carwow ran this exciting drag race that pits new against old.

The E60/E61 BMW M5 is a living legend and a high-water mark for cylinder count in BMW M products. During the early 2000s, the BMW M5 was defined by the high revving S85 5.0-liter V10 engine that produces an impressive 500 horsepower (373 Kilowatts) and 384 lb-ft (520 newton meters) of torque. This sensational engine is mated to either a traditional 6-speed manual transmission or the dismal 7-speed SMG single-clutch automated manual. In this drag race and during normal driving the weakest link for the E60 series M5 is always the SMG transmission which could never keep up with the high revving V10 killing a great deal of fun and performance.

To compete with the M5 we have the new M440i which elevates the performance of mid-tier BMW performance cars to a new level. The M440i is powered by a turbocharged 3.0-liter inline-6 that produces 382 horsepower (284 Kilowatts) and 364 lb-ft (493 Newton meters) of torque. This strong engine is mated to a ZF-produced 8-speed automatic transmission that shifts quickly and offers launch control. The M440i claims a 0 to 60 time under 4 seconds which makes it a genuinely quick performance coupe.

So which BMW is quickest in this battle of new versus old? Well, let’s let their performance on the drag strip do the talking.