BMW Tweets A Tongue-In-Cheek Request To "Use Your Blinkers" 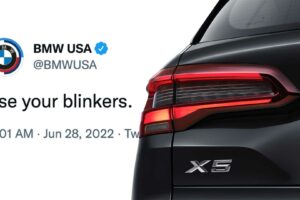 Friends, it’s time for a light-hearted public service announcement and we have BMW to thank for it. Those who follow the German brand on social media are accustomed to no-nonsense posts about cars, technology, racing, and other informative updates regarding all things BMW.

So when we saw a simple reminder to use turn signals posted on BMW USA’s Twitter account earlier today, it caught our attention.

And you know what? It caught the attention of many others. In just two hours, the simple three-word message (without photos) has 151 retweets and 29 replies. By comparison, a snazzy image of the BMW M4 GT4 race car that posted a day ago on Twitter has just 7 comments and 11 retweets. Folks, that’s what you call going viral.

For those scratching their heads on why turn signals are such a thing, there’s something of a stereotype regarding BMW drivers not using turn signals while driving. It ranks right up there with Mustang drivers crashing while leaving car shows, Audi drivers constantly tailgating, Subaru drivers vaping, you get the idea. We could go on and on about various stereotypes between car brands and drivers, and it might even be fun for a while. But eventually, some Corvette owner will get upset because they don’t have gray hair, and things will just get weird. And don’t even try to bring pickup truck stereotypes to the table.

As for BMW fans, they seem to be taking it all in stride. Several replies simply featured a laughing emoji, with a few staying on-brand by asking what blinkers do. One person even asked if BMW’s Twitter account had been hacked, which actually led us to wonder the same thing. We shot a message to BMW about the tweet, asking if it was legit and if there would be more light-hearted social posts in the future.

The answer to both of those questions is yes, so take heart BMW fans and exercise those turn signals. We’re looking forward to more fun BMW public service announcements in the future.