BMW unable to build 10,000 cars due to chips shortage – paultan.org 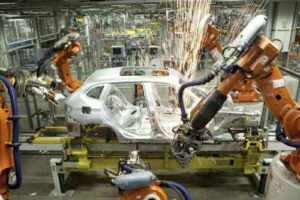 The BMW Group has revealed that nearly all of its manufacturing plants in Germany are affected by the ongoing semiconductor shortage, and has thus far prevented it from completing the production of 10,000 cars, Reuters reports.

Earlier in the month, BMW production board member Milan Nedeljkovic said that further shortfalls remain a possibility, and that the current semiconductor supply is at a very critical stage. “The outlook for the second half of the year, too, remains critical. The initial assumption, that it will be brought under control fairly soon and be covered more or less in the first half of the year, is difficult.”

Despite the shortcomings, the group posted record sales with 1,339,080 cars sold globally in the first six months of the year. That figure is a historic high, representing a 39.1% increase over 1H 2020, and a 7.1% increase compared to pre-Covid 1H 2019. All brands under its wing reported higher sales as well.

Meanwhile, Jaguar Land Rover recently said that the chip crunch is presently “very dynamic and difficult to forecast,” and expects the challenging situation to remain well through 2022. It is also expecting Q2 2021 deliveries to be “worse than initially thought.”

Other automakers such as Renault, Nissan, Hyundai and Volkswagen also warned of shrinking inventories due to the supply crisis, which began last December when demand for personal computing devices skyrocketed amid persistent pandemic lockdowns. A factory fire at a major manufacturer in Japan, unusually frigid weather in the US and an extended drought in Taiwan further exacerbated the crisis.

So far, analysts say the shortage has caused millions of vehicles slashed from the production lines all over the world. Consulting firm AlixPartners in May forecasted that the crisis will cost the industry US$110 billion (RM461 billion) in lost sales, forcing many car manufacturers to overhaul their strategy with electronic components.