BMW XM Already Gets An Internet Makeover In Unofficial Rendering 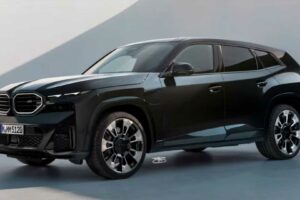 Finally, the legendary M1 now has a successor in the form of an SUV called the BMW XM. Although the plug-in hybrid high-rider XM is far from the wedge coupe body style of the M1, it still is BMW M’s standalone model that aims to represent the direction that the performance company is headed.

Since the production-spec BMW XM’s debut, many criticisms are thrown at its rather polarizing design. It’s unlike any existing BMW, mind you. Marouane Bembli, also known as TheSketchMonkey on YouTube, admits that he liked the overall design but that isn’t stopping him to do what he does best: give it a makeover.

He particularly adored the XM’s rear end so the adjustments were exclusively done on the front quarter view of the newest BMW M vehicle. Bembli said that the lower bumper was a bit too busy, so he simplified it and aligned it with other existing BMWs. He also shrank the kidneys despite the production version already being smaller than the BMW XM Concept’s comically huge grille.

On the sides, Bembli removed the graphic and replaced it with a distinct body line that runs below the greenhouse. The lower part has been resized as well, but that didn’t do much.

The resulting rendering is a cleaner look on the BMW XM. Though the boxy form factor is still there, it’s now more aligned to the current designs you see on other BMWs. Whether this works or now, that’s entirely up to you.

So what do you think? Does this redesign work for the better or worse? Do you like this better than the ones rolling off the showrooms? As always, let us know your thoughts in the comment section below.