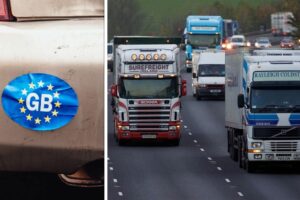 New proposals laid out by the Government seek to drop European Union rules on newly-qualified drivers operating heavy goods vehicles. If the plans are taken forward, teenagers who have recently passed their driving licence test would be eligible to operate lorries, large vans and minibuses.

A Government policy document stated that it was looking at “streamlining the path to HGV licence entitlement”, saying it had already “removed unnecessary staging requirements before testing for driving a lorry and trailer”.

It added: “We are committed to reviewing the rules for driving licences and tests further, including considering changes to licence entitlements, such as those for driving small lorries.”

Alistair Lindsay, Chief Operating Officer at Zeus Labs, said the renewed effort from the Government to alleviate the driver shortage was “welcome”.

It is estimated that Britain currently has a shortage of 100,000 lorry drivers, which has caused disruption to the delivery of food, fuel and other goods.

That includes thousands of drivers from the European Union member states who were previously working in the UK.

The Office for National Statistics estimates there were 16,000 fewer EU nationals working as HGV drivers in the year ending March 2021, than the previous year.

He also said it was vital that urgent action was needed to attract more drivers into the profession, as well as recovering from Brexit.

Speaking exclusively to Express.co.uk, Mr Lindsay said: “Removing barriers to qualify as an HGV driver is a tempting proposition, but here we risk creating yet more problems.

“Newly qualified drivers need to go through an apprenticeship/training programme stage, which, at £3,000 to £5,000 per person, proves much more costly for smaller hauliers with limited resources.

“Operating an HGV – from 7.5-tonne urban box trucks to large articulated trailers at over 40 tonnes – is a highly skilled profession that requires meticulous, thorough training.”

Even before Covid, the overall estimated shortage was around 60,000 drivers in the UK.

Some Whitehall officials are concerned that it could prompt a backlash from road safety campaigners over the risks younger hauliers face without adequate training.

Motoring groups like the RAC and the AA have said the measures would make Britain’s roads less safe.

Mr Lindsay continued, saying: “As 70 percent of hauliers operate small fleets, many simply do not have the resources to spend time teaching trainees how to operate trucks.

“Many of these hauliers are already faced with incredibly tight margins and need all hands on deck to manage deliveries, especially when considering the ongoing rises in the cost of living and fuel.

“Having drivers at the helm of HGVs without proper oversight and induction periods means a higher risk of injury and damage.

“The Government needs to understand this pragmatism and support owner-operators and owner-drivers in ways that reflect real investment in this industry.

“This means not lowering standards but increasing the number of state-funded HGV driving programmes, creating a bursary to support small hauliers in hiring trainees, and passing regulations to ensure insurance companies don’t adversely penalise those fleets with young drivers.

“This in turn would help to stabilise the industry and ensure a more resilient, future-proofed nationwide logistics network, which is essential in driving economic growth.”

Until 1997, once they passed their test, British drivers were automatically entitled to drive heavier vehicles up to 7.5 tonnes.

This was scrapped after the UK adopted new EU licence categories, which saw new drivers having to undergo further tests to drive heavier vehicles.

Older motorists who qualified before this date retained the right to drive heavier vehicles which some have dubbed “grandfather rights”.