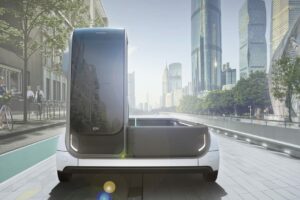 It’s built on an aluminium skateboard chassis, powered by a removable battery pack and has a maximum range of 100 miles

Oxford-based electromobility company Electric Assisted Vehicles, has revealed a concept for a new pure-electric commercial vehicle. It’s called the Lightweight Inner-City Solution, or LINCS for short. As its name suggests, it’s an urban delivery vehicle designed to service a busy city and its surrounding boroughs.

EAV hasn’t yet disclosed the size of the battery, but the company has said that each unit can store enough electricity for a maximum range of 100 miles in the city. The modular system means that the battery is easily removable, hinting that the LINCS has been designed with battery swap stations rather than charge points in mind as the primary source of refuelling.

The LINCS platform is also completely modular in terms of bodywork. The driver’s cab can be bolted down on either the right- or left-hand side of the vehicle to suit both the UK and European markets, while the rear can be configured as a covered van, an open pick-up or a dropside loader.

EAV says it has futureproofed the LINCS platform with an arsenal of sensors and software, ready for when autonomous-capable vehicles become the norm. The vehicle’s bodywork is also made from completely recyclable composite materials.

Another feature of the LINCS is a “Road Train” function, which allows multiple vehicles to be chained together and work like the HGV road trains known on Australia’s highway network.

The LINCS has also been designed to work alongside the eCargo, which is EAV’s smaller, pedal-powered, electrically assisted courier van. Both vehicles have mounts for the company’s specially designed cargo crates (called EAVRoRo boxes), of which the LINCS can carry four and the eCargo can carry one.

The idea is that the LINCS carries the crates into the city from the depot on the outskirts, where they can then be loaded onto a fleet of eCargos and delivered to their destination – and the firm says this system is more efficient than having a single van run all the deliveries.

Adam Barmby, EAV’s CEO and founder, said: “Towns and cities are vitally important to future living. We have a duty to urban communities, to the businesses that operate within them providing jobs, commerce and opportunities for the future.

Our duty is to provide an efficient commercial and passenger transport system that enhances the quality of life for everyone and everything within that community. LINCS, as well as the other EAV vehicles, provide a better, safer, more cost efficient and higher environmental standard.

It’s a big culture-shift step to walk away from the current legacy (diesel-powered) vehicles on the roads. It’s what we’re all used to after all and people don’t like change. But that change must happen and LINCS is a key part of the movement towards an exciting urban Future Transport vision.”