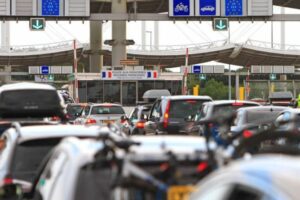 Brexit: France and UK must 'learn to co-exist' says Deas

The new driving law changes come after France tightened entry requirements due to a spread of the Omicron coronavirus variant. However, the update could be a hammer blow to dozens of UK citizens who may be unable to access their own properties in EU countries.

According to the new rule, the only way UK drivers can access French roads is if they also “hold French residency”.

“Following a French Government decision, on 28/12/2021, unless they hold French residency, British citizens are now considered 3rd country citizens and can no longer transit France by road to reach their country of residence in the EU.”

According to the European Commission, a third country national is someone who is “not a citizen of the European Union”.

It says this is “not a person enjoying the European Union right to free movement”.

In a confusing twist, the rules were updated last night giving an amnesty to anyone who had completed their trips before 28 December.

Eurotunnel’s message read: “Passengers travelling from the UK, with residency in other EU countries under the Withdrawal Agreement, can again transit through France to return home.

“This comes into force immediately.”

Social media was then baffled by the update as users hit back at the “badly worded” changes.

The update means UK citizens are able to return to EU homes as long as they have finished their trip in the UK by 28 December.