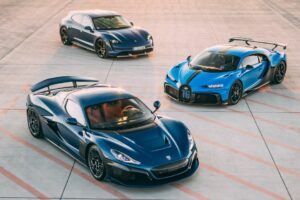 Rumours of Bugatti partnering up with Rimac have been circulating for some time, and we now have official confirmation that this will indeed happen, with Porsche also involved in the deal. All three companies recently announced the formation of a new joint venture called Bugatti-Rimac, which will be established in the fourth quarter of 2021 and be headquartered in Zagreb, Croatia.

As part of the deal, Rimac will hold a 55% share in the new joint venture, while Bugatti will be brought in by its current owner Volkswagen Group. The shares will then be transferred to Porsche, giving the German carmaker a 45% share in the newly formed company. It should be noted that Porsche currently owns a 24% stake in Rimac, which is an increase from 15.5% in 2019 and 10% in 2018 previously.

Under the umbrella of the new company, Bugatti and Rimac will continue to operate as separate brands, retaining their existing production facilities and distribution channels. Of course, both will combine their resources and expertise in research and development, production and other areas. Following the above, the Chiron and Nevera will continue to be produced at their respective locations, although it isn’t mentioned what future models (likely hybrid or fully electric), if any, are being planned and where they will be built.

In terms of structure, the joint venture company will be headed by Rimac CEO Mate Rimac, will members of the supervisory board include Porsche CEO Oliver Blume as well as deputy chairman Lutz Meschke.

Rimac has dealings with other automakers too, particularly in the production and supply of battery systems, drivetrains and other EV components. To ensure these clients are still catered to, the company will form a new entity – Rimac Technology – that it owns completely and will be an independent company working with several car manufactures. In time, Bugatti-Rimac’s global headquarters will be situated at the recently announced Rimac Campus, which will also serve as the home of Rimac Technology. Built with an investment of 200 million euros, the campus is set to open its doors in 2023 and will be the base for all R&D of future Rimac and Bugatti hypercars, backed by a staff of 2,500 personnel.

“This is a truly exciting moment in the short, yet rapidly expanding history of Rimac Automobili. We have gone through so much in such a short space of time, but this new venture takes things to a completely new level. Rimac and Bugatti are a perfect match in terms of what we each bring to the table,” said Rimac.

“We are combining Bugatti’s strong expertise in the hypercar business with Rimac’s tremendous innovative strength in the highly promising field of electromobility. Bugatti is contributing a tradition-rich brand, iconic products, a loyal customer base and a global dealer network to the joint venture. In addition to technology, Rimac is contributing new development and organisational approaches,” commented Blume.