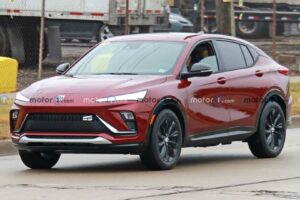 In November, Buick confirmed that the Envista crossover was coming to the United States. Now, we have spy shots of the model without any camouflage testing in Michigan.

The Envista is currently available in China, and Buick also builds the vehicle there. In that market, the crossover is available with a 1.5-liter turbocharged four-cylinder engine making 181 horsepower (135 kilowatts). A CVT sends the output to the front wheels. The setup gets the vehicle to 62 miles per hour (100 kilometers per hour) in 7.9 seconds. It’s not yet clear whether the version for the US would use the same powertrain.

The exterior design looks identical to the model available in China. This one wears ST badges, which likely indicate a trim level or package. The vehicle has a sharply styled nose and a heavily sculpted body. The only bit of camo on this car is on the rear hatch, and the covering likely hides the Buick name from the general public, even though the badge is readily visible.

Inside, the Chinese-market Envista has a 10.25-inch infotainment screen running the Baidu navigation system. While the display might remain the same size, expect the software to change for the North American version. The crossover offers a digital instrument cluster. Available features include a 360-degree camera system, a device charging pad, and wireless Apple CarPlay.

The exact launch timing for the Envista in the US isn’t clear. We expect it to debut before the end of 2023.