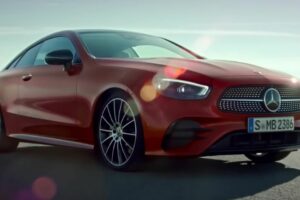 After launching the facelifted E-Class around two weeks ago, Mercedes-Benz Malaysia (MBM) has now begun teasing the imminent arrival of the coupe body style on its social media channels. The teaser doesn’t explicitly show the E-Class Coupe, but it does have scenes from an earlier advertisement featuring said model, and the use of the #MYMBDreamCar hashtag is another indicator of what to expect.

The refreshed C238 first made its global debut in May last year and receives almost all the updates seen on the W213. Styling-wise, there’s a new grille design at the front, which, unlike the sedan, is downturned and trapezoidal in shape for both Avantgarde and AMG Line packages.

There are notable differences though, as the Avantgarde grille has a chrome frame and a single slat running across a field of black pins, while the AMG Line sports a black frame and the pins are highlighted in chrome instead.

The latter also gets a more aggressive front bumper with prominent intakes, along with a diffuser element at the back. Given the pre-facelift E-Class Coupe arrived with only the AMG Line package on both the E 200 and E 300, we expect MBM to keep to the sportier look for the new model as well.

Other standout revisions that come with the facelift include angular headlamps that sport an L-shaped daytime running light signature, and the rear gets square graphics for the taillights. The overall profile and bonnet with its power domes are unchanged from before.

Inside, the E-Class Coupe gets the same steering wheel designs as its sedan sibling, with a regular three-spoke design on the Avantgarde, and a dual twin-spoke look for the AMG Line – both with capacitive touch sensors.

Similarly, there’s the Mercedes-Benz User Experience (MBUX) system in place of the previous COMAND Online infotainment, paired with dual displays on the dashboard. The default setup includes two 10.25-inch units, although with the Widescreen Cockpit, it becomes two 12.3-inch screens instead.