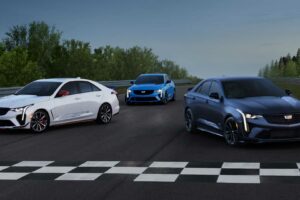 Now, the American marque is expanding the V-Series Collector’s Series once more with the CT4-V Blackwing Track Editions, celebrating Cadillac’s successes in the IMSA WeatherTech Sportscar Championship. The limited, special edition models come in three distinct flavors, separating them not only from each other but from the rest of the Blackwings on the road.

There isn’t any mechanical upgrade for these special edition models. Still based on the CT4-V Blackwing from last year, the 2023 CT4-V Blackwing Track Editions arrive as Watkins Glen IMSA Edition, Sebring IMSA Edition, and Road Atlanta IMSA Edition – each distinct from each other and with varying production timelines.  But first, let’s discuss what’s common among the three.

All three Track Editions come with IMSA logos, Mondrian decals, and variant-specific brake calipers on the outside. Serialized plates on the steering wheel and B-pillar mark each car’s exclusivity, as well as a shifter medallion, sill plate, and carbon fiber front seatbacks decorate the cabin.

Meanwhile, the Road Atlanta IMSA Edition is the most distinct among the three, coming with a Rift Metallic exterior paint finish plus Radiant Red side mirror caps and rocker moldings pinstripes. It’s also the only Track Edition version that’s available with an Adrenaline Red interior trim.

Pricing isn’t announced for the 2023 CT4-V Blackwing Track Editions. Only 99 examples of each will be produced, with the Watkins Glen IMSA Edition first on the line with a planned production somewhere between October and December 2022. The Sebring IMSA Edition is planned for January 2023, while the Road Atlanta IMSA Edition will be produced from February to March 2023.

Cadillac previously announced that ordering for the 2023 CT4-V Blackwing Track Editions opens on August 1, 2022. Information on availability should be available with Cadillac dealers.