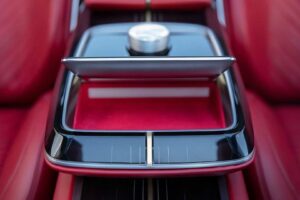 Cadillac continues to tease the Celestiq Concept by releasing the most revealing interior photos yet of its near-production electric flagship sedan.

Scheduled for an unveiling in late July, the pre-production show car is said to offer a bold vision of the future drawing from periods of Cadillac’s 120-year heritage. GM’s luxury brand says the Celestiq show car “sets new standards for exceptional craftsmanship and technology,” and looking at these interior photos it’s hard to argue with that statement.

According to Cadillac, the interior is open and spacious, and creates an experience unlike anything else with a focus on “meticulous detailing overlayed on a clean cutting-edge design.”

The close-up shots of the seats, center console, door panels and speaker cover suggest high-quality materials and craftsmanship. The seats look particularly spectacular thanks to the metal (aluminum?) element below the headrests, perforated leather with piping at the center, and ambient lighting bar surrounding the seat back.

The center console looks like a work of art, too, as do the perforated metal overlays for the speakers, presumably located on the door panels. Speaking of the door panel, it features seat adjustment controls in a similar layout to what we’re used to seeing on Mercedes-Benz models.

“The CELESTIQ exterior and interior were designed together to reflect a holistic vision of what American luxury can be. With CELESTIQ, we’ve created an even higher level of craft, allowing us to add that beautiful sense of movement through the cabin.”

The Cadillac Celestiq will be a limited-run, ultra-luxury model that will be hand-built at GM’s Global Technical Center in Warren, Michigan—the first-ever model in the automaker’s history to be made there.

Based on GM’s Ultium Platform, the flagship EV will also feature more 3D printed parts than any GM vehicle program to date. According to GM Authority, the Celestiq production model will be sold in limited quantities only in affluent areas and will be highly customizable given its very low production numbers and handcrafted nature.

Prices are expected to start from $200,000, making it by far the most expensive Cadillac model in the lineup. The Celestiq will reportedly enter production in 2023.