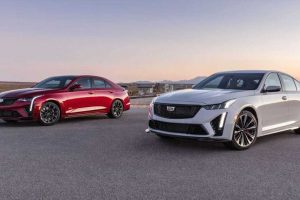 Here’s your first look at the range-topping sports sedans without the camo.

It’s no secret that Cadillac would be teasing the 2022 CT4-V Blackwing and CT5-V Blackwing during the Rolex 24 At Daytona. What we didn’t know was the extent of its final teaser before both cars’ big reveal at the beginning of February.

Turns out, the American automaker wanted to unwrap both range-topping CT4-V and CT5-V at the endurance race, surprising race fans with a first unobstructed look of the top-dog Blackwing models.

From the get-go, the CT4-V Blackwing and CT5-V Blackwing don’t deviate too far from the current V-Series range-toppers, though you can immediately see altered front bumpers particularly the shapes of the corner intakes. The forged magnesium alloy wheels are, of course, styled differently, plus they look a tad bigger than the non-Blackwing models’ rims.

Along with the dropping of the wraps, Cadillac also dropped a final teaser 60-second video for both performance sedans, which you can watch on top of this page.

So, what do we know so far? Caddy is banking on the premise of the “world’s fastest reacting suspension” on both sport sedans. Availability of a 6-speed manual tranny is already a fact at this point, along with the carbon-fiber seats that are rumored to be both heated and ventilated for the CT5-V.

Cadillac confirmed that the 2022 CT4-V Blackwing and CT5-V Blackwing will have limited availability. Previous reports said that pre-orders are limited to 250 each model, with $1,000 deposit required to secure the reservation. These early buyers will reportedly receive a number of exclusive freebies, which include a certificate of authenticity, enrollment in the Cadillac V-Performance Academy, and an unspecified gift.

The suspense won’t be too long as both Blackwing models are scheduled to be revealed on February 1, 2021 at 7:00 pm EDT (12:00 am GMT) via Cadillac’s livestream channels.