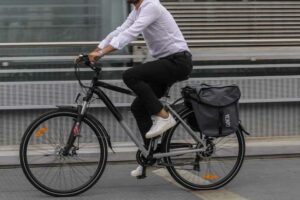 As more and more people get on bikes as alternatives to taking their cars to wherever they want to go, it goes without saying that the number of accidents involving bicycles and e-bikes is bound to increase, too. That’s just the way it is, unfortunately, as there are indeed a multitude of factors to consider when riding a bicycle on public streets—and it’s simply a fact that you’re way more exposed on a bike than in a car.

That said, the number of accidents in Carlsbad, California, has risen so dramatically that it has prompted the City Council to come up with short-term solutions to address the problem. The city reported a 233-percent rise in bike-related accidents over the course of the past three years, with the number of e-bikes figuring in accidents rising every year. For instance, in 2019, out of the 30 bike accidents, there were only two e-bikes. Compare that with 2022’s data, and you find that 32 out of 57 accidents involved e-bikes.

Naturally, electric bicycles have a higher tendency to get into more serious accidents. They’re heavier, and have their own power source, which when placed in the hands of an inexperienced or overly excited rider, could result in some gnarly accidents. Sure, regulations limiting the top speed of these bikes are well and truly in place, but no matter how you skin it, e-bikes will always be faster than standard bikes.

Jumping back into the situation in Carlsbad, California, the City Council recently approved the implementation of several traffic safety efforts directed specifically towards making the city’s roads safer for cyclists, both electric and otherwise. A budget of $2 million was set in place, with the breakdown including deploying additional police officers, holding training programs for law enforcement, deploying speed limit signs and electronic messaging boards, and bolstering the city’s safe driving education program.

According to the City Council, most of the bike accidents occured with the involvement of pedestrians, cars, other cyclists, as well as solo accidents. Unfortunately, in August, 2022, two deaths were reported, one after being hit by a motorcycle, and another one after being hit by a car. The City Council highlights that a bulk of its efforts to improve safety for bikers focuses on driver education—something that can certainly go a long way in making roads safer for everyone.

It’s a well-known fact, especially in the U.S., that drivers aren’t trained to look out for cyclists and motorcycles on the road. Instilling that awareness to drivers can make roads much safer for those who opt to travel on two wheels. Apart from driver education, the Carlsbad City Council is also working on the infrastructure side of things by adding green markings to bike lanes for improved visibility, as well as accelerating the construction of other traffic-focused projects such as roundabouts, speed bumps, and wider bicycle paths.