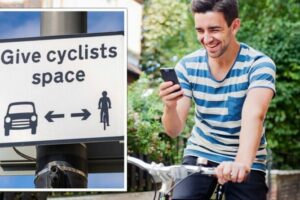 Baroness McIntosh of Pickering called for a change to the Highway Code to make it an offence for cyclists or people on e-scooters to use their mobile phones. Just three weeks ago, laws were changed to make punishments stronger for drivers who are caught using their phone at the wheel, rising to a £200 fine.

Lady Mcintosh questioned why the Highway Code, which requires motorists to “exercise proper control of your vehicle at all times” and bans the use of a mobile phone while driving, does not apply to cyclists and other road users.

Presently there is no specific offence for a cyclist using a phone, but a minister pointed out cyclists can be prosecuted for careless or dangerous cycling with fines of up to £2,500.

The Baroness is calling for the law change after witnessing a cyclist using their phone.

She claims a cyclist was on the wrong side of the road using their mobile phone with one hand, while she was attempting to cross over to the Houses of Parliament.

The Baroness’ plea follows Highway Code changes in January that introduced a “hierarchy of road users” ranking the most vulnerable to harm, such as cyclists and pedestrians.

It also places the greatest responsibility on car drivers for the safety of other road users, giving cyclists and pedestrians greater priority over vehicles at junctions and zebra crossings.

In response to Lady McIntosh, transport minister Baroness Vere of Norbiton said existing laws already cover the use of phones.

She added: “It is not a specific offence to cycle and use a mobile phone or headphones, but cyclists and e-bike riders can be prosecuted by the police for careless and dangerous cycling with maximum fines of £1,000 and £2,500 respectively.

DON’T MISS
Why is there a diesel shortage? How to check if diesel is available [INSIGHT]
GB News guest claims electric car ‘broke after a few months’ [SHOCKING]
Motorists risk £70 fine for parking on the pavement outside their home [WARNING]

“We should embrace any and all efforts to make our roads safer and using a phone while cycling can be particularly dangerous.

“If the phone is there to act as a bike computer it should be attached safely with a hands-free product such as a quad lock or bike-specific phone case.

“But even then, with the rise in the volume of potholes over the course of the pandemic, cyclists need their full attention to cope with the unexpected.

“Cyclist and bicycle insurance can help protect the bike riders and other road users by safeguarding their finances from claims, covering medical expenses, personal liability, theft and damage to property but it can’t keep people out of harm’s way.