Challenger Hellcat Tries To Show Off, Ends Up Flipping Silverado 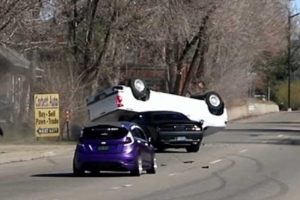 The people are ok, but the vehicles are in need of some serious TLC.

Cars and Coffee events have blossomed in the United States in recent years, but the one in Loveland, Colorado can now be scratched off the list following an incident that happened over the weekend. According to one of the show’s co-hosts, Loveland Cars & Coffee is officially no more after the driver of a Challenger Hellcat ruined the fun for everyone else.

So, what exactly happened? Footage recorded by attendees shows the muscle car leaving Cars & Coffee, but it doesn’t take long until it wreaks havoc. In his attempt to show off and impress the crowds, the driver makes it clear for everyone there his skills behind the wheel are certainly not something to aspire to since 700+ horsepower and cold tires are a bad mix.

Two videos shot from different angles show the Hellcat driver losing control and crashing into a Silverado that was minding its own business. It wasn’t just a minor fender bender as the truck flipped over on its roof with all four wheels facing the sky. According to the Loveland Reporter-Herald, the incident took place on Sunday morning and one person from the Chevy was transported to the local hospital with minor injuries.

As for the Hellcat driver, he received a ticket for reckless driving, according to Loveland Police Sgt. Rob Pride. It could’ve ended much worse if you take into consideration there’s a purple Ford Fiesta right behind the two vehicles. The driver acted quickly and slammed on the brakes, thus avoiding an impact with the Challenger and/or Silverado.

Loveland Fire Rescue Authority Capt. Mark Lyons told the Loveland Reporter-Herald the accident “looked worse than it was.” Ironically, the Challenger’s license plate reads “El Malo” (“The Bad”), which is quite appropriate taking into account what happened. It’s unclear whether the traction control was turned off, but either way, that much power combined with cold tires is a recipe for disaster.

Understandably, a message published on the Loveland Cars & Coffee official Instagram channel says “right now we are done [hosting the event]” and criticizes the man driving the Dodge for his unacceptable behavior behind the wheel.