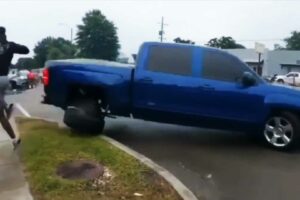 Friends, we have a new nominee for an automotive Darwin award. We’ve become used to seeing Ford Mustang drivers dominate this segment but we’re starting to think the pony car crowd might have learned some lessons in recent years. We haven’t seen many Mustang fails as of late, but this is the second wheel-destroying drift from other vehicles we’ve seen in just the last few weeks. Perhaps that infamous Mercedes-AMG drifter bought a truck?

The latest nominee comes to us from the fine folks at Reddit, where this video was posted. There’s no mention of where or exactly when this fantastic fail took place, but does it matter? We have a third-generation Chevrolet Silverado pickup truck packing a rumbly V8 under the hood, either a 5.3-liter or 6.2-liter engine but again, does it matter? Even a bone stock 5.3 from this generation packs 355 horsepower (265 kilowatts) and enough torque to tow a house. With an empty pickup bed, getting it sideways is as tough as sitting in a chair.

However, keeping it sideways and clear of obstacles is another matter entirely. Truth be told, a long-wheelbase vehicle like this big Silverado is rather easy to hold in an opposite-lock ballet. The more distance you have between the wheels, the more time you have to make corrections but obviously, you still have to not hit stuff. This video seems to show yet another street takeover event where egos far exceed driver skill, and as soon as the truck gets sideways we know exactly what was coming.

If there’s any surprise here, it’s the way the rear wheel snaps and comes to rest under the back of the truck. That fortunate bit of luck could well have prevented additional damage to the undercarriage and actually, looking at the carnage, this could be a relatively easy fix. A new axle, wheel, and hub are obviously needed, and the leaf spring looks broken as well. It’s not good, but if the truck had been a bit more sideways there would be a broken wheel and an injured bystander.

We get it. It’s fun to goof around with cars, but there’s a time and a place to do it and you know what? A narrow circle on a public street with a big pickup and people all around is not it. Here’s hoping the driver at least learned a lesson, though with a bystander at the end of the video saying this was his second crash, our hopes aren’t high.