Chevy Silverado Miraculously Drives Away After a Tornado Flips It Over 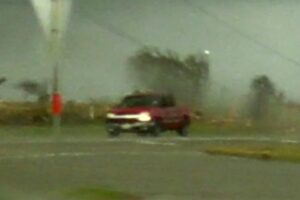 At least one tornado was spotted touching down southwest of Elgin, Texas during bad storms Monday night, and a storm chaser following the weather managed to capture some truly harrowing footage of a red Chevy Silverado pickup truck getting tossed around and flipped over, before landing on its wheels and actually managing to drive away after.

The unbelievable footage comes courtesy of storm chaser Brian Emfinger on Twitter and YouTube, who was recording the touchdown of yesterday’s Elgin tornado:

The video shows the cell of the tornado spin over the roadway just ahead of Emfinger, directly into the path of an oncoming red Chevrolet pickup truck. The truck gets caught in the tornado and flips over. Luckily for the occupants, the truck spun around eventually landing on all four wheels again, allowing the driver to speeed away from the storm.

The local KXAN NBC news affiliate reports at least one tornado touched down just outside Elgin around 6:40 p.m. yesterday evening, and that a large supercell moving through the area was spinning up multiple tornadoes that fizzled out relatively quickly.

Much of the damage from the storm is apparently located around U.S. Highway 290, with at least one “large facility” reduced to rubble. The KXAN news report makes no mention of any serious injuries reported in the area. Emfinger’s video description says at least one person was injured in the storm.

ABC reports another storm with tornados rocked the Texas community of Red Rock, located north of Austin, yesterday as well, with serious damage and some injuries reported. As many as 10 tornadoes were reported in the region yesterday, with more likely to hit tonight.

The National Weather Service has yet to update with more information about yesterday’s storms. However, the service has issued a continued tornado and flood warning for the region: “Several tornadoes, very large hail, and damaging winds are possible, focused on eastern Texas and adjacent states overnight (Monday) and then from Louisiana to Mississippi on Tuesday.”