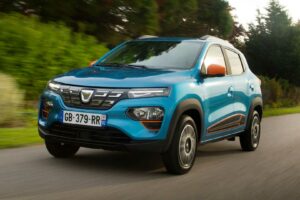 Electric vehicle exports from China to Europe more than doubled in November, creating a monthly record.

Interestingly, the bulk of the exports wasn’t made up of EVs from Chinese brands but from European automakers that have manufacturing facilities in the Asian country. This comes as European carmakers, including Volkswagen Group and BMW Group, aim to make parts and cars inside China due to limited production capacity in their home markets.

Car manufacturers in China – both domestic and foreign – exported $3.2 billion worth of electric vehicles in November, up 165 percent from a year ago, according to data from China’s customs authority cited by Bloomberg. That’s the highest-ever monthly total since records began.

Exports of electric passenger vehicles accounted for more than 50 percent of the total car shipments from China for two consecutive months, with November registering a record high of $6 billion in exports. This goes to show how competitive China-made EVs are and how quickly demand for them is growing in Europe.

The main destinations for Chinese-made electric vehicles were Belgium and England, which together took up nearly 70 percent of the shipments.

Tesla exported more than 37,000 electric vehicles from China in November 2022, after exporting only 60 in March and none in April, when production was halted due to the lockdown in Shanghai.

By 2025, up to 800,000 Chinese-built cars could be sold in Europe, most of them all-electric, according to a study by PwC. Of the potential 800,000 Chinese-made vehicles, approximately 330,000 would be from Western automakers such as Tesla, BMW and Renault Group, all of which currently export EVs to Europe from China, including the Tesla Model 3, BMW iX3 and Dacia Spring.