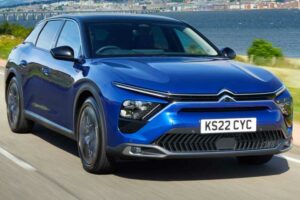 With the exception of a few markets around the world, SUVs and crossovers are now one of the dominating vehicle segments. Like it or not, these modern utilities generate huge profits for the automakers, and to a certain extent, they are the cash cows that make it possible for models like the Porsche 911 and Toyota Supra to still exist. According to a high-ranked executive from the automotive industry, however, the days of the sport utility vehicles are numbered in the new era of electrified and fully electric vehicles.

AutoExpress recently had the chance to chat with Citroen chief executive officer Vincent Cobee during the UK launch of the new Citroen C4 X. What Cobee told the online publication sounds pretty radical to us considering the current market share for crossovers and SUVs. “The world of SUVs is done,” Cobee said but honestly, we’ve reached the point where we can’t even imagine a world without new SUVs. Cobee at least admitted that the “numbers are not telling me I’m right” right now.

So, what’s the reason for the CEO’s prediction? The SUVs are simply not aerodynamic enough and with the growing aerodynamic requirements for EVs, these generally larger and less streamlined machines could become a dying breed. “On a battery EV, if your aerodynamics are wrong, the penalty in terms of range is massive. You can lose 50 kilometers between good and bad aero, and between an SUV and a sedan you’re talking 60/70/80 kilometers very easily,” Cobee summarized.

But there are other reasons, too. An SUV is generally significantly heavier than a hatchback, a sedan, or even a station wagon. And more weight means more resources needed for the production of the vehicle. And when you add that bigger SUVs need bigger batteries to deliver an adequate range compared to lighter vehicles, the situation looks even worse, Cobee said. Limitations in terms of battery size and vehicle weight will also come in the future. “People will start limiting weight and battery sizes, either through tax, through incentives, through regulation, through naming and shaming,” Citroen CEO added.

Don’t get us wrong – we understand everyone who buys an SUV. But we believe the world will be indeed a better place with fewer of them. And if Cobee’s words are an indication of what’s to come in the future, we can’t wait to be part of that future.