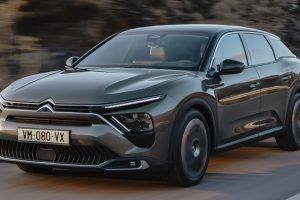 Following development car spyshots and an official teaser, the Citroen C5 X has now made its debut as a crossover, departing from the previous generation’s sedan shape. Inspiration for the design of the C5 X came from the CXperience concept that as unveiled at the 2016 Paris Motor Show, says Citroen.

These are exemplified in the V-shaped light signature at the front and rear of the car, applied to the lifted station wagon/shooting brake silhouette of the C5 X. Measuring 4,805 mm long with a 2,785 mm wheelbase, 1,865 mm wide and 1,485 mm tall, the new Citroen wears a high waistline and a ‘kick’ located above the rear wheels for a lower appearance.

The tailgate features a load sill for ease of loading luggage, into a luggage compartment that accommodates 545 litres with the rear seats in place, or up to 1,640 litres with the seats folded. The tailgate is motorised, and includes a hands-free function for convenience.

According to Citroen, the C5 X will be available with internal combustion petrol as well as plug-in hybrid engines, the latter offering a maximum combined output of 225 hp. This is the same peak figure as produced by the 1.6 litre PureTech petrol-electric plug-in hybrid powertrain in the Peugeot 508 Hybrid, and Citroen claims a pure-electric top speed of 135 km/h and range of 50 km – the latter the same as the figure claimed for the Peugeot, which packs a 11.8 kWh lithium-ion battery.

For reference, the 508 Hybrid is charged through a Type 2 connector, which takes four hours for a full charge from a dedicated 3.3 kW 14 A socket, or one hour 45 minutes when using the optional 6.6 kW 32 A three-phase AC Wallbox charger.

Citroen aims to recreate the ride comfort of its iconic cars in the C5 X with Advanced Comfort suspension that is fitted as standard, while the PHEV variant gets Advanced Comfort active suspension with a choice of three selectable modes. Here, the Progressive Hydraulic Cushion setup softens the suspension over harsh sections of road, while providing support for cornering. Rolling stock is a set of 19-inch wheels and tyres in ‘tall and narrow’ proportions, according to Citroen.

Occupant accommodations in the C5 X come courtesy of Advanced Comfort seats, which feature a high-density layer and thickened structured foam in its construction in order for its occupants to feel relaxed, even after the longest journeys, says Citroen.

Inside, the fully digital driver’s instrumentation is complemented by a large-scale, full-colour Extended Head-Up Display, which Citroen calls a first step towards augmented reality. This aids is providing a more relaxed driving experience as its driver will no longer need to take his or her eyes off the road to acquire information, such as speed, navigation and phone calls, says Citroen.

Taking centrestage on the dashboard is a 12-inch high-definition touchscreen, offering screen mirroring for smartphones while its interface draws from tablets in enabling access to customisation, settings and display preferences, as well as the use of widgets on its home screen. Active safety equipment in the C5 X is made possible by an array of cameras and sensors, which enable Level 2 semi-autonomous driving, says Citroen. The included Highway Driver Assist combines adaptive cruise control with Stop & Go and lane keeping assist, which lets the driver hand over steering and speed control to the vehicle when driving on motorways.

The suite of active safety systems also includes long-range blind spot detection, rear cross traffic alert and Top 360 Vision (surround view cameras) which offers an all-around view of the vehicle’s immediate surroundings. Further conveniences include promixity hands-free access and start, which unlocks and locks the doors of the C5 X as the driver approaches or leaves the vehicle.

The Citroen C5 X goes on sale in Europe from the second half of 2021, with a choice of internal combustion petrol as well as plug-in hybrid powertrains.