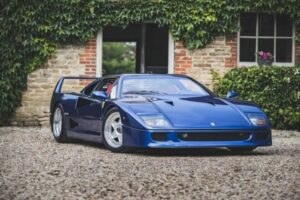 The custom blue exterior is matched with a classic Ferrari red and black interior.

The supercar even comes with a classic number plate – “F40 BLU”.

The price at launch was £163,000 but such was the demand for the limited run, that soon F40s were changing hands for much larger sums.

This gave rise to speculators “flipping” the iconic supercars – much as they do today with the more exclusive models from the major marques.

The car was shipped to Japan in 2004 after being purchased by famous tuners Liberty Walk.

In 2010 it was converted to LeMans specification and painted white.

The previous owner is Sam Moores, a podcaster, Youtuber and photographer, set up an Instagram account for the car, with more than 4,000 followers.

Motorway speed limits to be cut with rising emissions [INSIGHT]

He bought the F40 with the intention to strip it down and rebuild it to factory specification.

The Aqua Blue Metallic paint is officially a Porsche colour, which is commonly seen on their 911 line of supercars.

The car was originally developed to be a typical road car, and so the interior is more reminiscent of a racing car.

There are no door trims, door handles, stereo, carpets nor even a glovebox, but it does come with a memory stick of with pictures of the car.