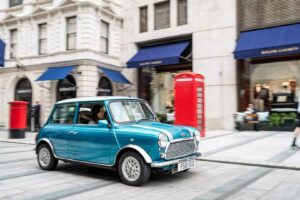 The original Mini is one of those classics that just doesn’t go out of style – people just love to drive them and be seen in them, which is why we’ll probably keep seeing them on the road for years to come. However, just in case older gas-burning cars won’t be allowed on public roads in the future, there is a way to keep driving the old Mini, if you have it converted to run on electricity.

That’s what a company in the United Kingdom called London Electric Cars is doing. The London-based outfit repurposes used Nissan Leaf components to power old Minis. Battery capacity is around 20 kWh (for a standard model) and this gives the electrified Mini a range of around 70 miles (110 km) on one charge.

20 kWh doesn’t sound like much, but in spite of that, London Electric Cars has had to put cells both under the hood and in the trunk. Upon customer request, the company will install more cells. They don’t mention the specifics of the motor that powers the car, but if it’s from a first-gen Nissan Leaf, then it makes 110 horsepower and 280 Nm (210 pound-feet) and, although it may have been tuned to make less power in such a small car.

The conversion costs £25,000, but if you don’t already own the Mini you wish to convert, then one will be sourced for you and you will have to pay extra. This is just the latest model on offer from London Electric Cars, which will also sell you a converted old Land Rover, Morris Minor or Traveller.

As a classic car enthusiast and advocate for affordable and sustainable electric vehicle conversions, it made sense for us to focus on the original Mini. With this EV conversion, we wanted the classic Mini to be an affordable yet useful option for city dwellers, not just in our hometown of London but all over the world, to tackle traffic and help put a stop to pollution.