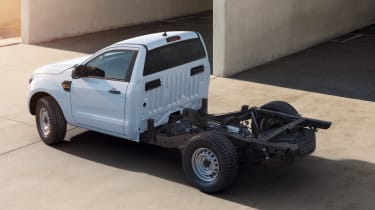 Ford has launched a new chassis cab version of the Ranger pick-up truck, which the firm says can provide the basis for a broad range of specialised vehicles within the construction and recovery industries. It’ll be available to order from January next year, with first deliveries expected to arrive during the spring.

Ford says the platform cab Ranger can support a maximum conversion length of 2,518mm behind the cabin. That’s enough for a range of specialised vehicles, such as a dropside pick-up truck, a tipper truck and dedicated vehicles for the emergency services, such as a mountain rescue response vehicle.

Like the standard Ford Ranger, this chassis cab version is powered by a turbocharged 2.0-litre four-cylinder diesel engine, which develops 168bhp and 420Nm of torque. The unit sends drive through a six-speed manual gearbox to a mechanical four-wheel-drive system.

As such, Ford says the Ranger chassis cab retains the same rugged dependability as the standard pick-up. It has a maximum braked towing capacity of 3,500kg; it’ll wade through 800mm of water and, thanks to its short front and rear overhangs, tall suspension and low-range transfer box, Ford says it’ll also perform well off-road.

Buyers can also spec a range of optional extras to support their conversions, such as a trailer light electrical connector, on-board high-performance batteries for power tools and an interface to operate the converted pick-up’s functions – such as a neutral lock-out switch, which prevents the tipper body from operating unless the vehicle is parked and in neutral.

For a bit of added convenience, the Ranger chassis cab falls under Ford’s “one stop shop programme,” which condenses the vehicle’s base price and conversion cost into one payment, rather than leaving buyers to source their own conversion specialist. As an added benefit, the conversion is also covered by Ford’s factory warranty.

What do you make of Ford’s new Ranger chassis cab? Let us know in the comments section below…

END_OF_DOCUMENT_TOKEN_TO_BE_REPLACED

END_OF_DOCUMENT_TOKEN_TO_BE_REPLACED
We and our partners use cookies on this site to improve our service, perform analytics, personalize advertising, measure advertising performance, and remember website preferences.Ok