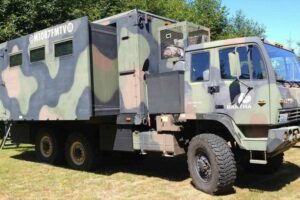 Thanks to an auction on Cars and Bid, you have the opportunity to purchase this unique 1997 Stewart & Stevenson M1087 FMTV. This surplus military vehicle was transformed into a capable overlander rig that combines a full RV-style living area with the rugged build of a military vehicle.

We’ve This 1993 Ford F-350 4×4 Ambulance Overland Camper Is For Sale, but this surplus military vehicle maybe the perfect overlander starting point. According to the Cars and Bids listing the current owner of this 1997, Stewart & Stevenson M1087 FMTV purchased this rig in June of 2018. From there, the owner got to work converting this former mobile military command center into a useful RV. The build utilized the Stewart & Stevenson M1087 FMTV’s extensive command center space to build out a comfortable living space complete with a full bathroom, kitchen with stainless appliances, and a bedroom large enough for a king-sized mattress.

The Stewart & Stevenson M1087 FMTV is powered by a 6.6-liter Caterpillar inline-6 diesel engine that produces 290 horsepower and 520 lb-ft of torque. This robust diesel engine is mated to a 7-speed Allison automatic transmission and has a towing capacity of 21,000lbs. For even more off-road capabilities the Stewart & Stevenson M1087 FMTV also includes locking differentials and a central tire inflation system.

This comfort-focused build turned the former military vehicle into a luxurious living space. The owner added a 60-gallon freshwater tank along with a Girard Products GSWH-1M tankless water heater and water purification system. The interior is heated via the same military-grade heater that came with the original truck while cooling comes from an LG mini-split AC unit. The kitchen makes extensive use of stainless steel and includes a large Vitrifrigo DRW180 refrigerator and freezer unit. If you’re interested in trying overlanding in a more affordable way, Nissan is offering customer a roof top tent accessory for Frontier customers.

The owner spent time adding a new electrical system to the M1087 that includes a unique solar roof setup. Power comes from Guangzhou Felicity Solar Technology LiFePO4 battery packs that feed into a 120volt system. The solar panels feed an advanced electrical system with solar controllers and inverters. The owner also added a Wi-Fi setup and WeBoost cellular signal booster to keep occupants connected. Place your bids today on Cars and Bids for a chance to own this one-of-a-kind creation.