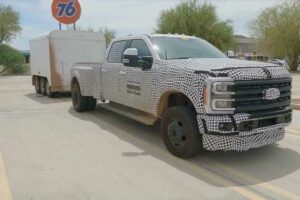 An evolution of the Ford Super Duty family of trucks is currently under development and we have a new spy video to share with you. It shows a convoy of camouflaged test prototypes spotted near Death Valley, all hauling large trailers. The video comes courtesy of the KindelAuto channel on YouTube.

These trial vehicles are most likely the same ones we saw in spy photos last month (see the gallery below), sent to us by a Motor1.com reader. It appears that our earlier guess on the number of prototypes was wrong as we can now see there are actually four disguised trucks in this convoy – two Super Duty Lariats and two Super Duty XLs.

This video comes as further proof the radiator grille on the new Super Duty family will be massive. It will feature a different design depending on the truck’s specification. Other notable visual changes at the front include modified C-shaped lights with LED technology, a larger Ford logo, and a tweaked front bumper.

No big changes are expected at the back, where the taillights seem very similar to what the current Super Duty series has. However, the shape now appears to be longer and more narrow, though there doesn’t seem to be any changes to the light arrangement within the clusters.

The cabin is the place where more significant changes could occur. For example, we bet Ford will install its latest infotainment tech with a large tablet-style display dominating the center console, similar to the layout seen in the new F-150. Other tech upgrades could also be in the cards.

The facelifted look will likely hide the same old truck bones, which means the powertrain range will carry over from the outgoing model. It includes Ford’s tried and tested V8 family of a 6.2-liter V8, a 7.3-liter pushrod V8, and a turbocharged 6.7-liter Powerstroke diesel. All these will be mated to a 10-speed transmission sending power to all four wheels as standard.

Look for an official and full debut of the new Super Duty family this autumn. Ford has already confirmed the truck will debut soon but hasn’t said whether we will see it during the Detroit Motor Show in September.