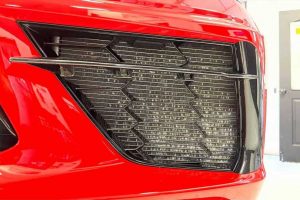 The condensers behind the front fascia are low to the ground and largely unprotected.

The prominent corner vents on the C8 Chevrolet Corvette’s front fascia are a defining design feature. They’re also functional, allowing airflow to reach the air conditioning condensers and engine radiators mounted behind them. Aside from a large honeycomb insert, the vents are nearly wide open, exposing fragile cooling fins to the elements virtually unprotected. Some C8 owners are seeing damage to the condensers in a short amount of time.

The Corvette pictured in the photo above reportedly has just 700 miles on the odometer. It comes from the C8 Corvette Owners (And Friends) Facebook group, where it’s led to a rather lengthy discussion on the need for additional protection at these corner vents. The group is members-only, so we can’t share the post here. However, the original poster granted Motor1.com permission to share photos, and as you can see, the cooling fins do show considerable damage.

Before going further, it’s important to note that we have no context for these photos. Apparently, the poster isn’t the actual owner of this car, so exactly how the damage occurred is unknown. Many commenters in the post questioned whether the driver frequently drives on gravel roads or follows other cars too closely. Aggressive use of a power washer could also fold over the cooling fins, and there is a pattern on the lower left of the condenser that suggests damage occurred as a single event, given the similarity of the folds. Furthermore, others in the post claim to have considerably more miles on their C8 with little-to-no damage at all.

With that in mind, are these open vents really an issue? More than a few C8 owners are at least concerned enough to seek solutions, and aftermarket companies have developed various mesh-style covers that mount behind the stock Corvette vents. It’s also a topic that’s been discussed a few times at the Mid Engine Corvette Forum, where everything from homemade solutions to aftermarket options and potential factory fixes are mentioned. The debate is whether or not additional screens restrict too much airflow, and whether GM already determined such things during testing, hence the open design.

Considering the lengthy development time for the C8 – we literally spent years catching prototypes on both the street and track – it’s hard to believe Chevrolet didn’t spend time evaluating this design for possible issues. We contacted the automaker with a series of questions about the vents, but we’ve yet to receive a response thus far. Should we gain some fresh insight, we’ll certainly jump in with an update.