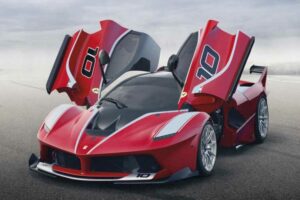 Ferrari won a legal dispute against Mansory for design infringement in the Court of Justice of the European Union. The Prancing Horse claimed that elements of Mansory’s modifications for the 488 GTB infringed on elements of the design from the FXX K.

The specific parts under dispute are the V-shaped element on the FXX K’s hood, the strake in the center of it, and the front lip spoiler with a thick, central upright. These elements combine into what the court documents call the vehicle’s “facial features.”

Ferrari took Mansory court over this issue asking for an injunction to keep the tuner from selling these parts. The regional court in Düsseldorf, Germany, didn’t accept these claims, though.

The automaker appealed to a higher regional court in Düsseldorf, and the decision there was to dismiss the appeal. Finally, Ferrari filed a case with the federal court of justice in Germany. This group decided an appeal was possible but wanted the Court of Justice of the European Union to clarify some aspects of EU law.

The Court of Justice of the European Union found in a way that should help Ferrari’s case. The court ruled that a component can “be an individual part with design rights if it is ‘a visible section of the product or complex product, clearly defined by particular lines, contours, colours, shapes or texture,'” according to Reuters reporting on the decision.

Now that there’s clarification on this legal issue, the case needs to go back to the federal court of justice in Germany. It’s not clear when those proceedings might happen, though.

The FXX K debuted in December 2014 as a modified version of the LaFerrari specifically for track use. The modified powertrain makes 1,035 horsepower (772 kilowatts) and torque in excess of 664 pound-feet (900 Newton-meters). The 6.2-liter V12 received different camshafts and a modified valve train with mechanical tappets, instead of hydraulic ones. The revised bodywork produced as much as 1,190 pounds (540 kilograms) of downforce at 124 miles per hour (200 kilometers per hour).