Cut your motoring bills with the award-winning Toyota Yaris 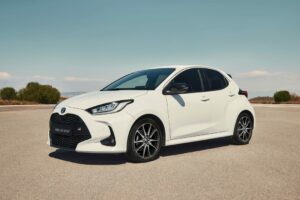 The price of fuel may have dipped slightly from the record-breaking peak we saw in summer 2022, but motorists are still paying significantly more per litre than just a few months ago. When choosing your next new car, then, efficiency should be high on the agenda.

This is something the Toyota Yaris Hybrid delivers. Using self-charging hybrid technology honed over 25 years, the Yaris Hybrid could save you up to £317* in fuel costs compared with modern rivals, and potentially even more if you’re switching from an older vehicle.

As a compact hybrid, we consider the Yaris the best all-round option, which is why Auto Express crowned the hatchback as the ‘Best Affordable Hybrid’ in its 2022 New Car Awards. Let’s take a closer look:

Under the bonnet of the Yaris Hybrid is a 1.5-litre three-cylinder petrol engine running on the Atkinson combustion cycle, which keeps the valves open longer for improved efficiency. This engine is joined by a continuously variable transmission (CVT), a pair of electric motor-generator units housed in one transaxle, and a lithium-ion battery pack. These components form Toyota’s fourth-generation hybrid system.

The battery pack is more powerful yet lighter than the nickel-metal hydride unit it replaces, and energy from the regenerative braking system can be accepted twice as quickly. The motor has shrunk too, yet it still outputs 59kW (79bhp) of power and 141Nm of torque.

The new set-up is 22 per cent more efficient overall, despite a 16 per cent rise in total system power, to 114bhp.

All that clever stuff going on under the skin makes a noticeable difference the moment you set off in a Yaris Hybrid. It’s able to stay in its EV driving mode for much longer periods, especially in built-up areas at lower speeds, with the petrol engine staying dormant.

This makes for a smoother, more relaxing driving experience, and a very efficient one; the official fuel economy figure is 68.8mpg, while the CO2 emissions are rated at just 92-112g/km. In fact, in Auto Express’s real-world testing, this powertrain has proven to be capable of beyond 70mpg when urban driving is heavy in the mix.

When you need to go further afield, there’s more than enough performance on offer. As well as being more powerful than the previous-generation Yaris Hybrid, the new car is also comfortably responsive, since the kerb weight has been kept low, at 1,085kg. It completes the 0-62mph sprint in 9.7 seconds, showing that you don’t have to compromise on performance in the quest for fuel savings. Nor do you have to sacrifice practicality; clever packaging of the hybrid battery pack and transaxle means there’s still space for four adults in the Yaris, plus a 286-litre boot.

A history of hybrids (panel)

Toyota has a quarter of a century of experience in building hybrids, thanks to part to the early introduction of the genre-defining Prius. Launched in 1997, its name is the Latin for ‘prior’ or ‘to go before’, and it was chosen as up until that point, there hadn’t been a mass-produced hybrid vehicle.

The Prius (latest version above) changed all that. It inspired countless rivals, and shared its ground-breaking hybrid technology with other models in the Toyota range, one of them being the Yaris. The first Yaris Hybrid arrived in 2012, providing the Prius’s efficiency benefits in a more compact yet still-practical setting.