Dacia Finally Introduces Its Fresh Badge Across The Entire Lineup 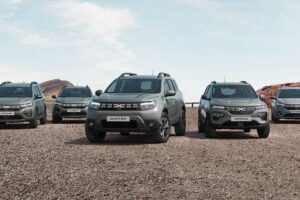 Dacia Link is the name of the Romanian brand’s swanky emblem we saw in early January 2021 on the Bigster concept. However, it wasn’t until June when the low-cost marque highlighted the minimalist logo with its interlocking “D” and “C.” It started being used around the same time in letterheads and communication documents before dealerships began to adopt the “DC” in early 2022.

Fast forward today, it has finally been applied to all models in the lineup. From June 16, customers will be able to place an order for their preferred Dacia with the new avatar, which comes along with a slightly redesigned front grille. At the back, the cars will not wear the new “DC” badge, but rather a prominent “DACIA” script in keeping with other automakers.

Aside from replacing the old logo (which was criticized for looking like a bottle opener), Dacia is also extending the color palette to include Lichen Khaki. Going for the Sandero Stepway and Duster will mean a Monolith Grey finish for the roof rails, side mirror caps, as well as the front and rear skid plates. All cars will get the “DC” badge on the wheel centers while the steering wheel will carry the full “DACIA” lettering.

The first cars carrying the revamped logo will be delivered to clients at the end of the year. Not that many models can go beyond 180 km/h (112 mph), but Dacia will become the first brand from the Renault Group to cap its cars at that velocity, starting in 2023. A new addition to the range will be represented by the production-ready Bigster, a larger SUV that’s going to be positioned above the Duster.

In the meantime, Dacia will publicly display the new logo on its vehicles for the first time in October during the 2022 Paris Motor Show. It’s unclear which models will travel to the City of Light, but the updated corporate logo is being rolled out concomitantly across the whole lineup: Spring, Sandero, Sandero Stepway, Logan, Duster, and Jogger.