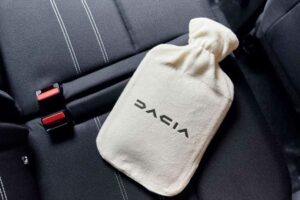 Great news! Dacia has a freebie at select dealers in the UK. Before you get too excited, the Romanian brand isn’t handing out cars, but rather water bottles. The Renault-owned automaker is taking a dig at certain automakers and the proliferation of subscriptions to unlock certain features. These “Heated Seat Saviors” are obviously a way of having harmless fun of BMW and its decision to charge money to warm your buttocks on a cold winter day.

Dacia says it is famed for offering simplicity and will avoid these cash grabs by allowing customers to access everything without having to worry about any paywalls. The low-cost car manufacturer points out that the flagship versions of the Sandero Stepway, Duster, and Jogger have heated front seats as standard equipment.

The hot water bottles will be available at the Dacia dealerships located in Brent Cross (London), Trinity Way (Manchester), and Fendrod Way (Swansea) between February 1 and 2 from 9 AM until 4 PM. Each showroom will hand out 25 of these so-called Heated Seat Saviors on a first come first served basis. People won’t be forced to buy anything from the dealers, which will offer one item per person.

Dacia UK’s Brand Director Luke Broad says “Heated Seat Saviors are a bit of fun, but they do highlight the direction the wider industry is going regarding subscription-based access to features. Asking someone to pay extra to activate factory-fitted equipment certainly isn’t Dacia!”

Since we mentioned Dacia is all about simplicity, company CEO Denis Le Vot said last year that customers shouldn’t be forced to purchase active safety tech if they don’t want it:

Although Dacia is known for offering some of the cheapest cars in Europe, the new Jogger Hybrid is the firm’s most expensive car to date (from €23,800 in Germany). A larger SUV previewed by the Bigster concept is coming by the middle of the decade and that one will raise the price ceiling furthermore.