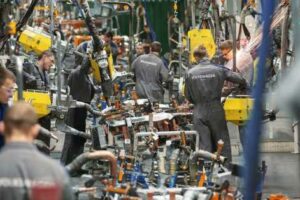 And so the semiconductor crisis worsens. Daimler and Volkswagen have announced that they will be cutting working hours at some of their plants in Europe, as the lack of chips continue to hamper vehicle production, Reuters reports.

A Daimler spokeswoman said the company will be reducing working hours this week at its German plants in Bremen and Rastatt. She said the situation was volatile and that it was not possible to make a forecast on the impact.

Volkswagen will also reduce working hours at its Wolfsburg plant next week, although it’s unclear how long the automakers plan to have this imposed. Last month, VW CEO Herbert Diess said the company was in “crisis mode” over the shortage, and the prolonged effect is bound to affect profits in the second quarter.

Meanwhile, other carmakers like Nissan, Suzuki and Mitsubishi have announced that they will temporarily stop production at their factories in Japan for a period of up to nine days. Nissan had earlier forecasted that its global production output would be down by approximately 500,000 units, but added that it is planning countermeasures to get production back up on track.

Those that cannot afford to leave their factories idle for too long have resorted to removing high-end features from their cars, or prioritising the production of newer models while putting older ones on hold. Experts predict that the semiconductor crisis is expected to last well into 2022.