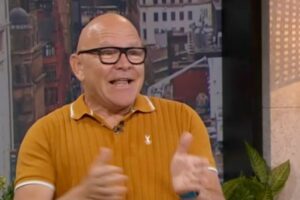 Car expert Dom Littlewood had more advice for anyone looking to snag a bargain in the current used car market as he appeared on Morning Live today. With tips including why the end of the month is the best time to buy a car and his reasoning for sky-high prices, Littlewood had a lot to offer.

Regarding the huge jump in used car values, Littlewood explained: “A lot of parts are made in Ukraine, particularly wiring looms.

“So basically cars aren’t being made as quick as dealers want them.

“Dealers aren’t getting the new cars, which means they’re not selling them, and people are holding on to used cars.

“That’s a jump of 69 percent because demand is outstripping supply.”

And with dealers charging such high prices, Littlewood was keen for people not to go negotiating if they don’t know what they’re doing.

He said: “Generally speaking, if you don’t know, you haven’t got a Scooby Doo. Don’t try.

“Take along someone who does, or if you don’t know anyone, pay someone from the RAC or the AA to do an inspection.”

Littlewood also had expert advice to give on when the best time is to try to get a bargain.

He said: “End of the month is always good, because dealers have to hit a target.

“And if you’re lucky, you might get the end of the quarter. You obviously don’t know when that is, but at that point they need to clear their stock particularly the ones that they paid for.

Littlewood went on to tell viewers about important regulations that could save thousands when buying a car.

He explained: “Good little tip for you is a thing called distance selling regulations.

“Now if you’re buying from a main agent or a registered dealer, you’ve got 14 days after you take delivery to return it for a full refund – it doesn’t have to be faulty.

“But if you buy it inside a dealership, not on the internet, you don’t have that cover.

“So if you’re buying a car online like that, make sure you sign that documentation on your doorstep and make them deliver it.”

Meanwhile, the wholesale price of used cars dropped by 5.9 percent last month as the cost of living, economic pressures and the war in Ukraine took their toll.

Despite prices still being far higher than the same period last year, it is a sign that the surge is likely to be ending.

Stuart Pearson, the chief operating officer at British Car Auctions (BCA), said that the start of April had realised fears that the expectations of buyers and sellers were “drifting apart” after it saw the average used car sold for £9,340 last month – down by £595 month-on-month.

He said: “Last month we raised concerns that sellers and buyers ran the risk of drifting apart in March, and whilst there was an initial positive step, the reality is that by the end of the month things were drifting again, with the final published move into April falling well short of what the overall market was seeing.”