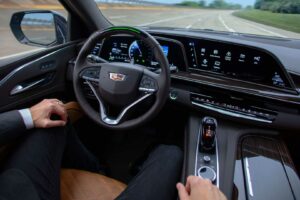 Like it or not, the automotive industry constantly keeps pushing the technology toward self-driving vehicles. At this point, it’s difficult to tell whether fully autonomous vehicles will rule the world in this century – there are hundreds of important questions that need to be answered first – but the path seems to be clear that automakers won’t stop working on the tech. But are the consumers ready to embrace driverless cars already?

Judging by many surveys we’ve seen and tons of comments from our readers, the short answer is no. A new study, conducted by the Insurance Institute for Highway Safety, even shows consumers want appropriate safeguards in vehicles equipped with partial automation. In general, consumer interest in these technologies is strong but drivers prefer systems that require them to stay engaged in driving and take responsibility for the vehicle.

“Automakers often assume that drivers want as much technology as they can get in their vehicles, but few studies have examined actual consumer opinions about partial driving automation,” Alexandra Mueller, the survey’s primary designer, explains. IIHS asked more than 1,000 drivers from the United States looking for feedback on three partial automated systems – lace centering, automated lane changing, and driver monitoring.

The results of the survey reveal more drivers would prefer hands-on versions of the safety features their vehicles are equipped with. For example, some lane centering and lane changing systems don’t require input from the driver but those generally find less support in the survey. IIHS also says drivers generally prefer driver-initiated systems over vehicle-initiated semi-self-driving tech.

The majority of drivers also said they would feel more comfortable if there are driver-monitoring systems on board. These include, for example, sensors on the steering wheel and a camera aimed at the driver’s face tracking the direction they are looking at. In general, more than half of the surveyed consumers said they would at least consider buying a vehicle with some sort of automated semi-autonomous functions.