Drivers warned as they could face £1,000 fine before upcoming caravan towing law change 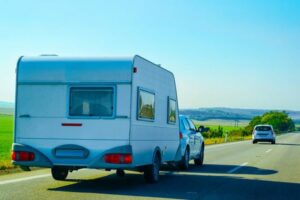 CHANGES to caravan laws were recently announced with drivers soon being able to tow a caravan without taking a test, but not everyone is happy about it. The Government announced these changes last week and clarified that drivers would no longer need to take a car and trailer test to be able to tow a trailer or a caravan.

From September 20, car and trailer driving tests will be stopped, with drivers no longer being able to book or take the test from that date.

However, the law will not change until later in 2021.

Before the rule change, those who passed their car driving test before January 1, 1997, could drive a vehicle and trailer combination up to 8,250kg maximum authorised mass (MAM).

Once the law has changed, drivers who passed their test from January 1, 1997, will be allowed to tow trailers up to 3,500kg MAM.

The DVLA will update driving licence records to show that drivers are allowed to tow trailers and caravans.

When a driver gets a new photocard driving licence, the category BE will be added.

The Government website has outlined the rules that drivers will need to follow until the law change.

It states: “Until the law changes later in autumn 2021, you must continue to follow the current rules about what you’re allowed to tow based on when you passed your car driving test.

“You can be fined up to £1,000, be banned from driving and get up to six penalty points on your driving licence if you tow anything heavier before the law changes.

“You’re only allowed to tow anything heavier if you’re being supervised.

“When you’re being supervised, you must display L plates to the front of the car and the rear of the trailer.”

Drivers must also be accompanied by a person who’s at least 21 years old and has had category BE on their driving licence for at least three years.