Drivers warned of massive £1,000 fines for not drinking enough water 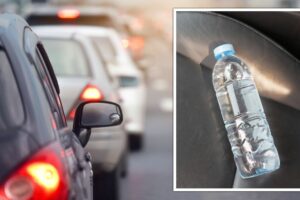 Motorists risk a £1,000 fine for failure to have proper control of a vehicle due to dehydration symptoms such as dizziness and loss of focus. Because of this, drivers have been urged to ensure they are well hydrated before setting off to avoid fines and minimise the risk of getting in an accident.

In the UK it is recommended to drink six to eight glasses of fluid per day.

If a road user is going to spend a lot of time driving, it is unlikely that they will have a chance to do this.

It is recommended for drivers to have a glass of water before setting off on their journey to ensure they are hydrated before the trip.

Once they have already set off on their journey, it can be more difficult to keep the water intake topped up as they drive.

Many experts recommend for drivers to keep a water bottle handy so they can take a drink when they want to.

He said: “We’re used to checking the water and oil levels of our car before we set off but how many people check their own water levels?

“When starting your car before a long-distance journey, you may not think drinking an extra glass of water before leaving the house would affect your driving abilities, but you would be wrong.

“Drinking more water will not only have a positive effect on the body but will also prevent the chance of dizziness or loss of focus because of it.”

A side effect of overusing air conditioning in the car is that it can have a drying effect on the atmosphere which, if the humidity drops low enough, could cause mild dehydration.

The Met Office has warned that many parts of the UK are likely to exceed 30C and may even reach 34C in some places today.

It added that temperatures this high were “unusual” for this time of the year.

Drivers should look out for some key signs of dehydration when they are driving.

This can include more obvious signs like dizziness, becoming light-headed as well as loss of concentration.

People should also be careful of ailments which may make them more susceptible to becoming dehydrated.

Those who are suffering from diabetes, have too much exposure to the sun or those who have had a recent bout of vomiting could be more likely to become dehydrated.

Research from the University of Loughborough found that even a mild form of dehydration is the equivalent of being over the limit when calculating errors in driving.

Mild dehydration has been shown to cause impaired cognitive function and altered mood.

This can result in an increase in driver errors, with more errors occurring at a greater rate following fluid restriction.