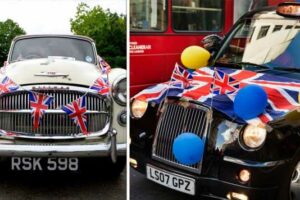 With the Queen’s Platinum Jubilee celebration weekend fast approaching, the nation is ramping up and getting in the spirit for the four-day weekend and planned events such as Trooping the Colour and Party at the Palace, but drivers are being warned. There aren’t any specific laws in place to stop drivers from adding novelty accessories to their cars, which will be seen around the country during the Jubilee celebrations and the World Cup at the end of the year.

Rule 30 of the Road Vehicles (Construction and Use) Regulations 1986 states that drivers must, at all times, have a “full view of the road and traffic ahead of the motor vehicle”.

Ignoring these regulations and using decorations, particularly around the windscreen and front of the car, could put drivers at risk of being fined.

An area of 290mm high, from the centre of the steering wheel, and within the swept area of the windscreen should be kept clear at all times – with stickers, or other obstructions only allowed to impede a maximum of 10mm in this space.

Any drivers found to be in breach of the rules could be given a £100 on the spot fine, with penalties also able to increase to a maximum of £1,000 and three points on the licence.

For those tempted to add a novelty mascot to their vehicle, it may be worth thinking twice before purchasing.

Rule 53 states that no mascot, emblem or other ornamental objects should be in a position where it is “likely to strike any person with whom the vehicle may collide”.

For anyone who is still tempted to accessorise their car, any decorations, like flags, should be fastened securely to the vehicle before setting off.

Drivers could be hit with further fines if their accessories fly off when driving, especially if it falls in the path of another driver.

Motorists could be charged with driving without reasonable consideration for other road users, which is often referred to as inconsiderate driving.

Again, drivers found to be in breach of this rule can receive on-the-spot fines of £100 and three penalty points, rising to up to £2,500 and disqualification in serious cases.

Dan Gick, Managing Director of Scrap Car Comparison, warned drivers of the punishments they face for celebrating the Jubilee.

He said: “Car decorations are something we often see around the World Cup and in line with major sporting events, but they have also seen surges in popularity around royal events such as the Diamond Jubilee weekend in 2012, and of course royal weddings.

“Although it’s always good to get in the spirit, and it may seem like a harmless bit of fun to pop a flag up on your car, the consequences of any mismanaged decorations can potentially be incredibly severe.

“Both in terms of fines and points, but also physically in the event of a collision.

“We wouldn’t want people to miss out on the fun, or put them off celebrating the best way they know how, but we would encourage reading the guidance around car decorations to ensure they are used safely.”

The decorations could even invalidate car insurance, as they can be considered as cosmetic upgrades which insurers may view as altering the car away from its original specifications.

Additionally, it could be argued that stickers on the rear windscreen could impair their road vision, thus invalidating the policy in another way.

This comes as retailers report that bunting shortages are being seen as revellers look to celebrate the Platinum Jubilee.

One retail marketplace said that Jubilee paraphernalia like a 20ft ream of union flag bunting that cost £4 has sold out.

It is estimated that 39 million adults will be doing something to celebrate the Jubilee, with 4.1 million families due to attend a street party.