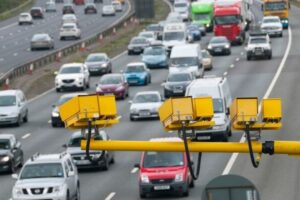 County Durham: Bird box is disguised as a speed camera

Speed cameras are getting more advanced, with new technology being deployed that not only does away with the need for officers pulling a driver over, but can also check for valid tax, insurance and MOT.

With cameras having long been an object of ire for many a driver, Express.co.uk has the facts on speed cameras, from what colour they have to be to how fast you can go without triggering them.

Greg Wilson, founder of Quotezone.co.uk exclusively said: “Speed cameras are a frequent bugbear for motorists in the UK, with new drivers particularly likely to incur their wrath.

“However, while a speeding fine can be a bitter pill to swallow, and the accompanying penalty points can also push up the cost of your car insurance, measures like this help to prevent road accidents.

“And with road casualties continuing to be a serious issue nationwide, it’s important for drivers to understand that speed limits and speed cameras are put in place to save lives.”

Read the list below to find out the truths about those dreaded yellow boxes.

The ‘10 percent’ rule is true
Speed camera operator Gareth Thomas from Go Safe said: “You will not get a ticket provided your speed does not exceed the limit by more than 10 percent, plus 1mph.
“So for example, travelling at 35mph or above in a 30mph zone will be recorded as a speeding offence.
“However, Go Safe say thresholds vary and can change without notice.
“Officially, any speeding offence occurs at 1mph above the limit, but most forces will allow a variance.”

Speed Cameras and Police Speed Traps Have To Be Easily Visible
While many speed cameras and police speed traps are highly visible and easily spotted, there is no obligation or law stating they must be.
Police cars are within their rights to hide behind a bush and a camera can also be placed out of sight.

How far away can speed cameras catch you from?
Current speed camera technology allows detailed video and images of drivers to be taken from up to one kilometre away.

Speed cameras have to be yellow
In 1992, Gatso cameras were painted grey, but a change in the law meant that they had to be painted bright yellow.
The rear-facing Gatso is the most common camera on the road, but it’s accompanied by the Truvelo, which uses a forward-facing camera to catch speeding motorists.
Unlike the Gatso, it photographs the driver at the wheel, meaning there’s no disputing who was at the wheel at the time of the offence.

Speeding Tickets Must Be Issued Within 14 Days
An NIP (Notice of Intended Prosecution) must be posted to the vehicle’s registered keeper within 14 days of the offence otherwise the ticket is invalid and the issuer will typically have to obtain proof of sending.
If the ticket arrives on time, the alleged offender will have to tell the police who was driving within 28 days.

Cameras can tell if you’ve jumped a red light
Some speed cameras combine with traffic light cameras to monitor lights and junctions too. They can detect vehicles travelling over the stop line or entering the intersection after the lights have turned red. If the speed of the vehicle exceeds the legal limit, or a vehicle runs a red light, the camera is triggered.

The minimum fine is £100
The minimum penalty for speeding is generally a £100 fine and three points on a licence.
However, this could be higher if the speed limit was exceeded by some distance.
A court summons could follow, however if it’s a first offence and the driver has no points on their licence, they could be offered a speed awareness course instead of penalty points.