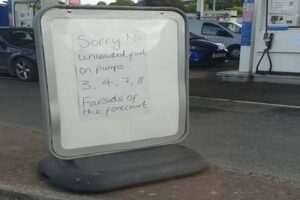 A supermarket petrol station in Tiverton in Devon has run out of unleaded fuel. Because of this, motorists face a wait for its return to the pumps there.

Signs at the Tesco on Blundells Way say that they will not be replenishing their tanks until early October.

The pumps are still set up for E5 petrol rather than E10 which has taken over pumps across the country.

Outside the pumps, a note was left for drivers.

It said the pumps would not be changing to E10 fuel until they have new pumps installed next month.

Originally, only four pumps were out of petrol, but by 3.30pm, all pumping stations were dry.

The petrol ran out as someone was trying to fill their car on pump six.

When onlookers questioned, a fuel attendant said: “That’s it now, no more until October.”

According to Devon Live, Tiverton only has four petrol stations.

Another petrol station in the town heard about the issue, with staff concerned they would not be able to refill.

However, their pumps were cleaned and filled up when the UK moved over to E10 and have been supplying it for several weeks.

This is one of the first instances seen with petrol stations having issues with E10 fuel since its introduction in September.

Drivers on social media have been critical of the new petrol with various issues.