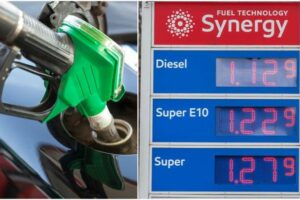 E10 fuel will launch across the UK next week, however, experts are warning the change could end up costing some car owners as much as 10p per litre more. The new fuel is being introduced by the Department of Transport in a push towards offering more eco-friendly types of fuel.

E10 fuel is said to be a more eco-friendly type of petrol, using 10 percent more ethanol than regular unleaded petrol.

The fuel is made using a mixture of standard petrol and ethanol produced from products such as waste woof, sugars and grains.

E10 fuel is expected to cut CO2 emissions on UK roads by a whopping 750,000 tonnes annually.

The drive is part of the UK’s goal to achieve net-zero carbon by 2050.

However, it will mean drastically reducing the amount of E5 petrol on offer.

Moving forwards, it is expected that E5 fuel will only be available from Premium Unleaded pumps.

How much will it cost?

E10 petrol will not cost any more than standard E5 petrol costs at the pump currently.

This is good news for car owners who will be able to fill up their tank with standard E10 petrol.

A Department for Transport spokesperson said: “Around 95 percent of petrol-powered vehicles are already compatible with E10.”

However, the downside is that not all car owners will be able to use E10 petrol.

For those who can not use the new E10 petrol, they will have to use the E5 petrol which is on sale – in most cases, this means using Premium Unleaded.

Petrol prices in the UK change daily based on the rising and falling cost of gasoline worldwide.

Drivers can find out the most up-to-date cost at their local petrol station.

They can also save money by price comparing between petrol stations.

Why will some car owners end up paying more to fill up their tanks?

The bad news is that not all cars are compatible with E10 fuels.

In fact, due to the amount of ethanol in the fuel, consistent use can damage seals, plastics and metals in certain car engines.

Older cars, in particular, are at risk from using E10 fuel.

Howard Cox, of FairfuelUK, said the introduction of the new fuel could “hit small businesses and drivers on low incomes who cannot afford newer E10-attuned vehicles”.

AA fuel price expert, Luke Bosdet, added: “The big challenge for those hundreds of thousands of car owners with cars that can’t use E10 petrol is where to find super unleaded at its cheapest.”

The expert claims that car owners who can not use E10 may find themselves paying 10p per litre more to fill up.

He explained: “With super unleaded on average already 10p a litre dearer than ordinary petrol, ending up on a motorway forecourt…could raise the litre cost for those drivers from the current 135.4p UK average for regular unleaded to 163.9p for super unleaded.

The key to sourcing the cheapest Super Unleaded is to price compare between gas stations.

Experts recommend trying to fill up at supermarket petrol pumps, which are often priced lower than their motorway counterparts.