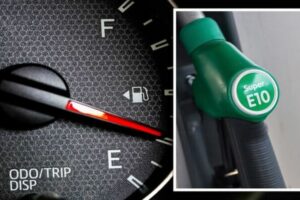 According to new research, since the introduction of E10 petrol in September 2021, it has cost drivers over £1.7billion to fill up their petrol tanks. Based on the Government’s proposals for a mandated rollout of E10 petrol, it was estimated that the fuel was 2.3 percent less efficient than its predecessor.

At the current average price of petrol, this equates to an eye-watering additional cost of £1.7billion to UK vehicle owners.

This is more than double of the Government’s original estimate which stood at £701million.

In 2021, drivers travelling the national annual average of 8,000 miles could have expected to pay around £866 for petrol.

When the petrol was unveiled, the Department for Transport said that E10 would have a marginal impact on fuel economy, although this was believed to be around one percent.

It said that other factors like the weight of the car and the driving style would have a far bigger impact on the efficiency of a vehicle.

Ryan Fulthorpe, motoring expert at GoCompare said it would continue to have a huge impact on drivers.

Speaking exclusively to Express.co.uk, he said: “Unfortunately, in the midst of a fuel crisis we are also realising the impact of the switch to E10 petrol on motorists’ pockets.

“Getting fewer miles per gallon means spending more to drive the same distance.

“Coupled with the climbing cost of fuel, this is a real blow to car owners.”

E10 petrol is blended with up to 10 percent renewable ethanol and made up of materials such as low-grade grains, sugars and waste wood.

The move was heralded as being another step towards the Government’s target of net zero emissions by 2050, by slowly decarbonising petrol.