Electric cars: The five electric cars with the longest mileage range – from Ford to BMW 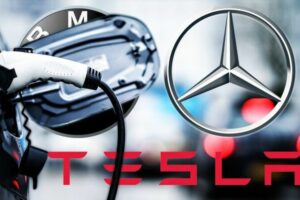 Electric cars are a hot topic right now, with the long term savings on fuel and road tax making them an attractive choice for drivers. While these battery-powered vehicles will save you money on running costs, electric vehicles (EVs) are not always up to scratch when it comes to mileage. Some of the early modern EVs struggled to match the range of a tank of fuel, but newer models are becoming more competitive than ever with their petrol-counterparts. These are the five electric cars with the longest mileage range.

Planned bans on petrol, diesel and hybrid vehicle sales have led to a surge in the number of UK drivers choosing electric cars.

After 2030, no new petrol and diesel cars and vans will be sold in the UK, with hybrid sales also to be banned from 2035.

According to the RAC, there are an estimated 395,000 zero-emission Battery Electric Vehicles on the UK’s roads – though many of these will struggle to drive more than 300 miles without needing to be re-charged.

Choosing a vehicle with a high mileage range is essential for many long-distance drivers, and these are just five of the most highly-ranked models to consider.

The longest-range electric car currently on sale is the Mercedes EQS, according to AutoExpress.

This all-electric model is an emission-free version of the brand’s S-Class flagship saloon, but has a deeply impressive maximum range of 435 miles as stated by Mercedes-Benz.

One of the most enticing features of this modern vehicle is its decorated pulse model, known as the EQS 450+, which can travel up to 485 miles before charging.

You can charge this model in as little as 31 minutes at most rapid charging stations (200kW).
Key features include:

Another Mercedes frontrunner, the EQE model is a recently-revealed all-electric saloon that works as the equivalent of the E-Class in the German brand’s range.

It uses the EVA2 platform that’s shared with the EQS, allowing for a large 90kWh battery in the EQE 350 model.

The impressive range of this luxury car boasts a mileage which is 50 miles more than what you get in the Tesla Model 3 long range.

While the EQS is renowned for its speedy charging rate, the EQE model takes a little longer and is limited to the 170kW fast chargers.

The Tesla Model S cemented the brand’s place in the electric car market, though the vehicle has recently undergone a major update to make it even better.

With a headline range figure of 405 miles on the long range model, the Model S Plaid version still offers an impressive 396 miles on the road before charging.

One of Tesla’s key selling points is its 30,000+ Superchargers which are placed across the globe, helping to keep you on the road after each 405 mile stretch.

This flagship model can be charged up in no time using “supercharging max”, a 250kW charging point.

BMW’s flagship electric SUV is the iX model, with a range of up to 380 miles in the topxDrive50 version.

The lesser xDrive40 has a less impressive range of just 257 miles, falling well below the front-runners in this top five roundup.

Charging is a non-issue for both models, with rapid charging technology allowing a 10-80 percent top up in as little as 30 minutes.

This all-electric SUV is around five metres long, competing with some of the largest competitors of its kind on the market.

The Mustang has earned its title as a “legendary” model, making the Ford Mustang Mach-E a welcome addition to the iconic range.

This fully-electric SUV claims a 379 mile range when fitted with the 88kWh battery and rear-wheel-drive setup – making it a close competitor to the BMW iX.

Ford claims that this modern vehicle is able to travel as far as 73 miles after just 10 minutes of charging.

Both home and public charging options are available for this flagship electric car, which promises a “rewarding and dynamic driving experience”.