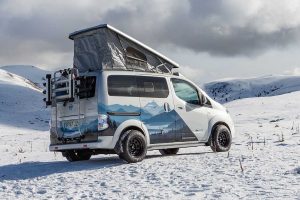 All-electric campervan features a built-in kitchen, a folding bed and a power pack that can be recharged using a roof-mounted solar panel

There are a couple of aftermarket companies which offer conversion kits for the e-NV200, but this concept marks the first time Nissan has attempted an in-house conversion.

Compared with the standard e-NV200 commercial van, the Winter Camper features raised suspension, wider wheels and chunky off-road tyres, all of which provides improved performance when driving on mud and snow.

These tweaks are complemented by a set of front and rear mudguards, door entry guards, side bars and hose-down rubber floor mats. The front of the van also features a pair of 5,400-Lumens spot lamps, for extra visibility when driving off the beaten track.

Inside, there’s a fitted kitchen, a few storage cabinets, a fold away table and a rock-and-roll bed, which can be transformed into a bench seat. Nissan has also fitted insulating glass, a refrigerator and a pop-out roof, to provide the occupants with a little more headroom.

The kitchen, lights and fridge are all powered using a separate 220V power pack, so there’s no chance of you draining the van’s battery pack when you’re parked and getting stranded. It’s charged using a solar panel mounted on the roof.

Nissan hasn’t made any changes to the e-NV200’s powertrain – like the standard Combi van, it features a 108bhp electric motor and a nominal 40kWh battery pack. Charge times remain the same at around 40 minutes for an 80 percent top-up, but we expect the upgrades will have put a dent in the standard van’s 170-mile maximum range figure.

There are a couple of aftermarket companies which offer conversion kits for the e-NV200, but this concept marks the first time Nissan has attempted the upgrades in-house. It has been pieced together by the brand’s Spanish team of engineers, where camping accessories for the e-NV200 can be bought from the factory.

Nissan currently has no plans to put the Winter Camper concept or a normal camper derivative into mass production, although a spokesperson for the brand told Auto Express that might change if the project’s public reception is strong enough.

What do you make of the Nissan e-NV200 Winter Camper concept? Let us know in the comments section below…