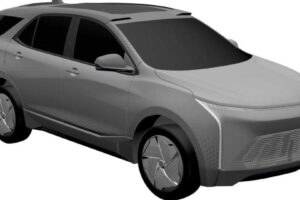 The future of GM SUVs is coming.

An electrified Chevy Equinox SUV could be on the horizon. In a recent Chinese patent filing by GM partner SAIC, we see images of what could be the future of Chevy SUVs. Based on the images provided with the patent filing it’s clear this Equinox style SUV has similar styling cues to the current Equinox and Chevy Bolt. When will this new electrified SUV hit your local dealership? Well, it’s complicated.

It’s no secret that manufacturers are rushing to master the world of electric vehicles. Part of this battle is building EVs that are appealing and affordable for the masses. Since modern-day car shoppers are not interested in cars at all and prefer SUVs, it would only make sense for Chevy to double down on the potential for an EV SUV.

Much like American car shoppers, Chinese consumers are also interested in both SUVs and electric vehicles making it critical for Chevy to capitalize on this growing market. Chevy and General Motors are partnered with SAIC to build GM vehicles for the Asian market.

SAIC builds its own assortment of vehicles that it sells in China. In addition to building its own cars, SAIC also builds cars for GM and Volkswagen. These partnerships allow established brands to sell to Chinese customers without the cost of exporting or building new factories on-site in China. With these contracts in place, both customers and the involved organizations will benefit from better products and distribution.

It’s only a matter of time before we see more mass-market EV SUVs. With the recent success of the Ford Mustang Mach-E, it’s clear GM wants to challenge Ford and carve out a slice of this new and exciting market. The only question is if an EV version of a familiar family hauler can beat out a bespoke EV-only model.