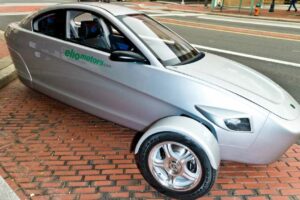 Remember Elio? Back in 2015 or thereabouts, the Arizona-based startup hit the auto show circuit with a two-seat three-wheel commuter car that it claimed would sell for just $6,800 (later increased to $7,450) and return 84 mpg. It was founder Paul Elio’s solution for a post-recession America that desperately needed affordable wheels.

Aside from the engine—a 0.9-liter three-cylinder engine designed by Germany’s IAV—most of the Elio’s components were off-the-shelf parts from existing suppliers, which the company said offered huge opportunities for customization. Elio even came up with an innovative financing scheme, effectively a secured credit card with the car as collateral. For every $1 of gas purchase by an Elio owner, said owner would make a $2 car payment.

The Elio was to be built at GM’s shuttered Hummer plant in Shreveport, Louisiana, where the company promised to create 1,500 new jobs. It was an intriguing concept, and Elio took some 65,000 deposits, most of which were non-refundable.

But then the inevitable happened: The mid-2016 start-of-production date was delayed again and again. Aside from a few brightly colored prototypes, most powered by three-pot Geo Metro powertrains, no cars were built and no jobs were created in Louisiana. Finally, in 2019, Elio stopped updating its website.

But just recently, the website became active again with a new announcement: The Elio will be reborn as an electric vehicle known as the Elio-E. Target price: $14,900.

According to the press release, Elio’s original plan was to launch the gasoline-powered Elio-G first, then follow up with a battery-powered electric version. (This is news to us: When one of our staffers drove the Elio P4 prototype in 2015, there was no mention of an electric car.) Now, given the climate of the car business, Elio has decided to launch the electric version first, and then—maybe—the gasoline version.

Something closer to the truth can probably be found in this part of the press release: “Most of the engineering for proof of concept for the gas Elio-G can be utilized in the development of the electric Elio-E. Elio contacted its engineering partner Roush and their assessment was that the current design could be successfully electrified. Utilizing the work already completed will significantly shorten development time versus a clean sheet of paper approach. “

Translation—our guess, at least—is that someone at Elio figured out that off-the-shelf electric motors are cheaper than bespoke gasoline engines.

Is the Elio-E really going to happen, or is the announcement just an attempt to prop up a failing startup? Elio’s stock price—which leaped as high as $50 shortly after its 2016 IPO, and spent most of 2021 falling from just over a dollar to a low of $0.30—did see a brief jump to $1.10 on the Elio-E announcement. Alas, it’s been steadily dropping since.

If the car does materialize, it already has competition: Electra Meccanica’s three-wheel, single-seat Solo that offers 100 miles of driving range. After a half-decade of fits and starts, E-M has actually delivered a few cars to customers. (We’ve driven the Solo, and those customers have our sympathy.) There’s also the Vanderhall Edison, which is huge fun, but not exactly a product with mass appeal.

Still, the Elio-E has the potential to be an interesting car. It uses front-wheel drive, so it won’t suffer from the rear-motor Solo’s annoying tendency to jack its rear end up every time you hit the accelerator. Plus (if we recall correctly), the Elio P4 prototype we drove was rather fun to putter about in at the sub-50-mph speeds we were allowed to hit.

That said, we can’t help but think this announcement is an attempt to keep the Elio dream alive and the company afloat. It doesn’t take a marketing genius to see that appeal for a car like this is limited, and by the time mass production happens—if it happens—we’ll likely have several automakers offering sub-$30,000, four-seat, four-wheel electrics which, unlike the Solo, Vanderhall, and Elio (which are technically autocycles), will qualify for tax incentives.

Back in the heady $7,000 Elio-G days, the company told us it’d need to build 150,000 to 200,000 cars per annum to be profitable. In other words, Elio would have to out-sell Volvo and Jaguar Land Rover right out of the gate. And that was before the company has what USA Today estimates to be $28 million of deposits on which to make good, in addition to the $7.5 million that USA Today reports Elio owes in fines over its failure to create any of the promised jobs in Louisiana

We’ll keep an eye out for more Elio news, and we certainly wish the company all the best—as we do for the 65,000 hapless folks who put down deposits and never got a thing for it. If the Elio-E appeals to you and you’re thinking of reserving one, we say, maybe it’s best to wait.