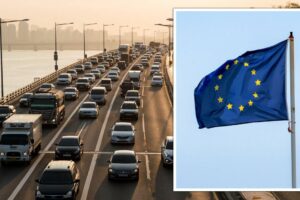 This is part of the European Union’s fight against global warming, looking to target the main causes of carbon emissions.

Jan Huitema, a Dutch MEP for the People’s Party for Freedom and Democracy, was the lead lawmaker on the policy.

Before the vote, he called for clarity in the car industry, designed at stimulating innovation and investment.

Around 15 percent of the EU’s total greenhouse gas emissions comes from road transport.

People will still be able to drive petrol and diesel cars and re-register the existing ones past this date.

Tiemo Wölken, an MEP for the Social Democratic Party of Germany, took to Twitter to celebrate the news.

He wrote: The EP (European Parliament) has just decided that new combustion engines should no longer be permitted after 2035.

“In addition, we also rejected expensive, unavailable bogus solutions that the FDP and Union wanted.

“A real success for industry and climate!”

The UK Government has set out plans to ban the sale of new petrol and diesel vehicles from 2035.

A further ban affecting hybrid cars will be introduced in 2035.

The car industry and some political voices were calling for a more gradual transition to fully electric fleets.

“Some much needed good news for the climate.”